While some causes of sole ulcers remain an enigma, veterinary leaders focused on better understanding the transition period.

By Carla Wardin, Michigan dairy farmer
The author and her family own and operate a sixth-generation dairy near St. Johns, Mich. 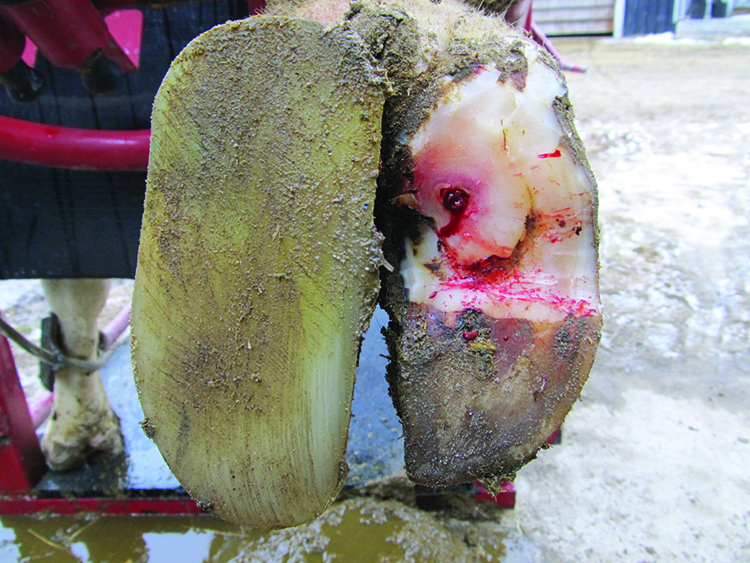 This sole ulcer is in a typical location under the flexor tuberosity of the pedal bone. The sole horn had been pared away three weeks earlier to expose the lesion and provide drainage. At that point, a wooden block was placed on the "paired claw" to alleviate weight-bearing on the affected claw.

While digital dermatitis tends to garner the headlines when it comes to hoof health, sole ulcers remain a real concern. Scientifically known as pododermatitis circumscripta, sole ulcers are one of the most debilitating, costly, and common causes of lameness affecting dairy cows.

It’s because of these reasons that the American Association of Bovine Practitioners (AABP) updated its sole ulcer prevention and treatment recommendations. While the AABP Lameness Committee released the paper, Lowell Midla served as the author and detailed the recommendations.

Sole ulcers are caused by injury to the solar corium, the sole horn-producing tissue that disrupts regular production. They occur for a number of reasons, including when there is an injury paired with a reduction in the thickness of the digital cushion, which happens when a cow is dehydrated, older, or in low body condition.

Ulcers can also be induced by the hormones surrounding pregnancy that naturally get released near parturition. The calving-related hormones enhance ligament elasticity. Unfortunately, these same hormones can cause the pedal bone to sink, which increases compression and the chance of an ulcer. Standing on hard surfaces for an extensive amount of time, inflammation, and changes in shape due to previous disease are all additional reasons cows may form ulcers.

Due to the myriad number of reasons cows may present ulcers, the AABP fact sheet focuses on prevention. There are four “P’s” to that prevention:

Preventing all sole ulcers isn’t possible, and the AABP also covers the most successful treatments. First, the organization, which includes over 5,000 bovine veterinarians worldwide, recommends removing all loose horn tissue to fully expose the area. Then, Midla and the committee advise applying a block to the healthy claw to give it a chance to heal and produce new sole horn. In addition to the block, the veterinary advisers suggest using a nonsteroidal anti-inflammatory medicine to provide pain relief. They do not recommend applying bandages or any type of substance to the affected area.

The AABP suggests that the follow-up to treatment should be to segregate the cow in a deeply bedded pen, reduce walking distance, and reexamine the cow in 30 days. They warn that leaving blocks on without checking could lead to ulceration in the blocked claw. If the sore has not healed, the cow should be re-trimmed and re-blocked for another three to five weeks.

Sarah Wagner is chair of the Lameness Committee for the AABP. As a professor of pharmacology at Texas Tech University, she focuses her research on drug therapy, especially in the prevention and treatment of lameness in cattle.

“The fact sheet has been updated to reflect our improved understanding of the many factors that contribute to the development of sole ulcers, including time spent standing, hormonal changes during the transition period, low body condition, and previous sole ulcers,” Wagner said. “The updated version also includes new illustrations.”

Gerard Cramer is a member of both AABP and the Lameness Committee. He’s also an associate professor in the department of veterinary population medicine at the University of Minnesota. Before arriving at the university in 2013, he dairy farmed, owned a foot health-specific veterinary practice, and received his doctorate in both veterinary medicine and veterinary science from the University of Guelph. He currently studies and speaks on hoof health and antimicrobial resistance.

“Cows with ulcers are the biggest source of chronically lame cows,” Cramer said. “The fact sheet focuses on early detection, treatment, and rechecking in a month.”

“The biggest change in the fact sheet first concerns the recent research on what factors change during the transition period and, second, the technical reasons that are the source of bony changes,” he explained.

As both a past dairy farmer and veterinarian, Cramer sees the same issues.

“Farmers are always looking to control digital dermatitis, and vets and hoof trimmers ask what’s new to do for it. Everyone deals with it,” he said.

Cramer has been part of the Lameness Committee since 2005, but he has always been interested in foot disease.

“I did my grad work while I was dairy farming, as it was an easier off-farm job than being a part-time dairy veterinarian. I could also do my own research,” he said.

In 2020, Cramer received a grant from AABP to further sole ulcer knowledge. He and his colleagues aim to develop a sole ulcer model to understand the pathophysiology and evaluate the prevention and therapeutic strategies.

Results from their pilot study showed that transition cows exposed to a few days of short lying times (four to six hours per day) plus prolonged (four to five weeks) or excessive weight-bearing on the hoof developed severe sole hemorrhage. They plan to restrict a cow’s lying time to less than six hours for a least six days and increase the duration of excessive weight-bearing to six weeks.

“The fact sheet clearly states that we don’t always know what causes sole ulcers, so we are trying to see if we can induce them to treat them. It’s not easy,” Cramer said.

The Lameness Committee evaluates and updates all their fact sheets on a schedule, making sure that they all contain the latest information on hoof and foot health.

“We’re the odd folk,” Cramer said of those working in the area of hoof health. “There aren’t a lot of vets that are interested in it because a lot of times we deal with bad tools and unsafe conditions. But the committee and AABP are interested in the research because it matters to farmers and cows alike.”