MARKETS CONTINUE TO RECALIBRATE as consumers begin to emerge from the COVID-19 pandemic. Those adjustments have been a mixed bag for dairy as many inputs such as corn, soybeans, fuel, and labor have climbed due to higher demand and subsequent inflation.

THE INDEX OF PRICES PAID BY FARMERS for commodities and services, interest, taxes, and wage rates climbed from 108.1 to 112.6 in a 12-month window. As a result, USDA reported a 4.2% jump in costs.

A PALLET SHORTAGE could add to disruptions in the food supply chain as lumber prices have climbed 200% to 350%, depending on tree species. As a consequence, pallet prices spiked 400%, reported Produce and Processing magazine. The pallet shortage could persist through 2021.

ON THE CHEESE FRONT, prices softened throughout May. As a result, the bundle of June-to-December Class III futures followed suit, moving from a $19.30 average in May to a $18.30 midpoint by early June.

AS THAT TOOK PLACE, CLASS IV contracts for the months of June through December shifted only 25 cents, moving from $17.45 to $17.20.

WITH THE CME FUTURES MARKETS predicting a smaller gap between Class III and IV in the coming months, the negative producer price differentials (PPDs) could finally disappear from milk checks. That’s the good news, predicted the University of Wisconsin’s Mark Stephenson.

“THE BAD NEWS is that much of the closed gap between manufacturing milk prices has occurred because cheese prices have softened,” he said. “This is likely to be more the norm going forward, as there has been significant cheese capacity added and even more capacity on the way.”

EVEN AS FEED PRICES HEADED HIGHER, states with strong cheese processing capacity continued to retain dairy cows. USDA’s Livestock Slaughter report indicated 44,000 fewer cows were sent to slaughter when compared to the prior month and 21,900 fewer than a year ago.

IT’S THOSE HIGHER FEED PRICES that were responsible for another Dairy Margin Coverage (DMC) payment in April. In that month, the milk-to-feed margin was estimated to be $6.94. That, in turn, led to a $2.56 per cwt. payout for farmers buying the maximum $9.50 coverage.

PROTEIN CONTINUED TO FETCH top billing in milk checks at $3.13 per pound in May. Butterfat claimed a $1.99 payout. Those component prices contributed to an $18.96 Class III price and a $16.16 Class IV.

JBS, WHICH PROCESSES 25% OF U.S. BEEF, was the target of a ransomware attack in early June. The company initiated a shutdown of many meat packing facilities across the country so the damaged computer systems could be shut down and backup servers could be brought online.

WHILE THE COMPANY RECOVERED in rather short order, the cyber attack illustrates vulnerabilities in U.S. meat processing that typically runs at 100% capacity. “Any glitch has a ripple effect,” explained James Lowe, University of Illinois College of Veterinary Medicine.

SELECT SIRES COULD HAVE A NEW LOOK if five member cooperatives ratify their respective bylaws to unite their federation and create Select Sires Cooperative Inc. The strategic planning process began in 2016. 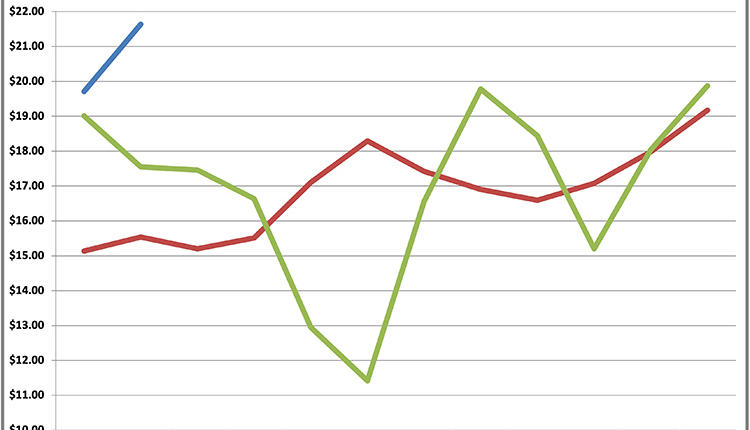 High milk prices won’t look as good as in the past
Milk Check Outlook
Related to:
dairy news, markets
In Dairy News