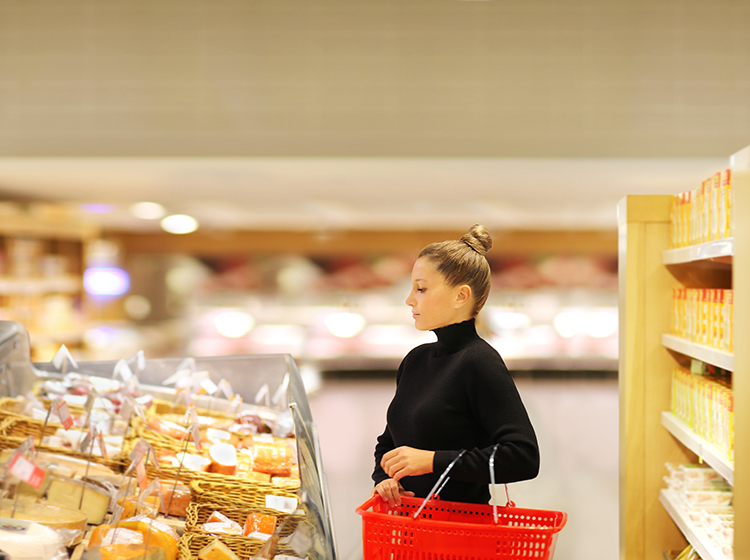 It would be easy to blame the recent price weakness on very strong milk supply. U.S. milk production in May was up 4.6% from last year. The amount of fat and protein content in the milk was also up from last year, so on a component adjusted basis, production actually was up 5.9% from last year. Sales of bottled milk have been running well below a year ago, so if you factor that in, the amount of milk solids left over for processing into cheese, butter, and powders was likely up about 7.5% from last year.

That sounds very bearish. If you have to make a presentation to the executive team or your customers, or if your brother-in-law asks you what is happening in the markets, I would tell them production is very strong and that appears to be depressing dairy prices in the U.S. On top of the situation in America, global production is also strong and likely helping to bring prices down as well.

However, I believe there is also something else going on that is helping to drive the prices lower. I’m not sure if it is a drop in commercial demand, a drop in government buying, or a drop in exports, but there must be something happening on the demand side that isn’t visible in the data yet.

If you can remember back to March and April, CME block cheese rallied up to $1.80 in both months (barrels hit $1.80 in April, too), but by mid-June, the market was below $1.50. What has changed since March? 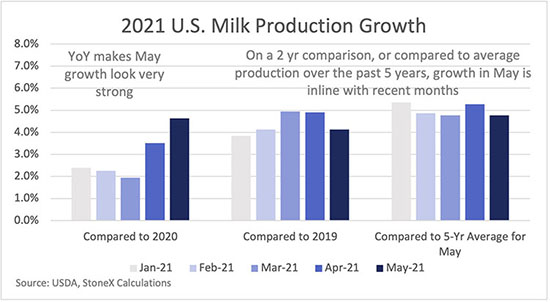 All this said, there is plenty of milk around. Don’t get me wrong. I’m not arguing that supply is tight. The dairy herd has expanded by a record amount and production growth is running above trend. But that statement was as true about March as it is about May.

Why have prices weakened so much in May and June? 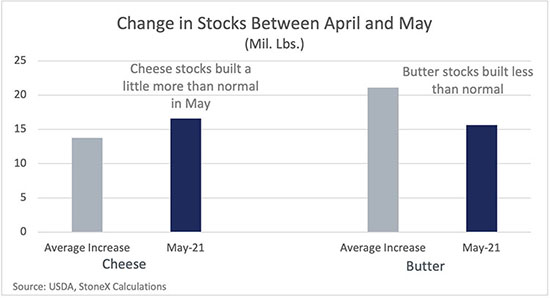 You could argue that it is the cumulative impact of strong milk production. Maybe there was nothing special about May, but maybe strong production growth since the start of the year has pushed inventories higher and that is now weighing on cheese and butter prices. Cheese stocks did build much more than normal in March and April so that the year-to-date buildup is more than normal. However, if you look at May specifically, the seasonal increase in cheese stocks was only a little stronger than average. Butter stocks did not build as much as normal in May. Like with the milk production data, arguably the data was as bearish, or more bearish, back in March and April, yet prices didn’t weaken until the second half of May. Why?

I don’t have a good answer yet. My theory is demand must have really dropped off in late May.

If you look at Class III milk price basis in the Upper Midwest, there was a sharp shift lower in late May. Production growth in May was similar to March and April (if you compare against something more stable than 2020), so I have a hard time blaming the drop in basis on a big shift in supply. 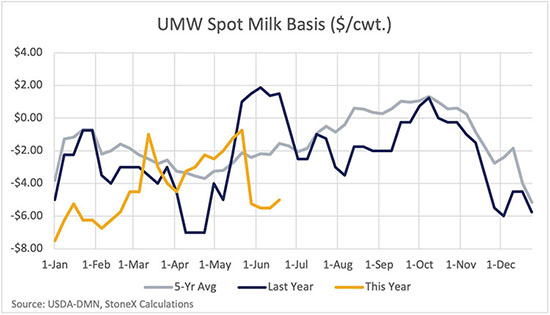 The Food Box program did end in May, and I think there was something in the range of 1.2% to 1.5% of milk production moving through the program. Schools would have been wrapping up for the year as well. Maybe the lack of Food Box and school buying was enough to tip the market into the bearish funk, but I think commercial demand (or exports) must have dropped off as well. It will take another month until we get the June Cold Storage report to see if the demand side weakened considerably or if we can blame all the weakness on supply.

Even young farmers can use an estate plan
By Nate Donnay, StoneX Group Inc.