Meal planning a must for autofeeder barns 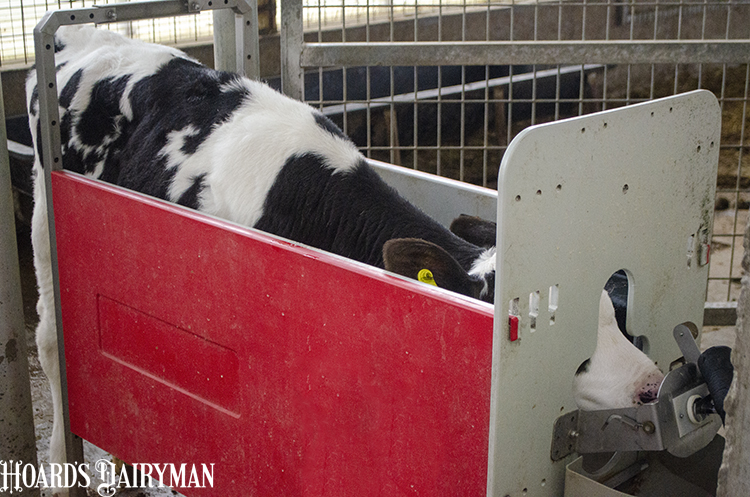 To make a busy week simpler, some people like to plan meals ahead so they don’t have to worry each day what to make for dinner. Similarly, an established feeding plan is an important part of successfully raising calves on autofeeders.

“It is non-negotiable, whether calves are housed in pairs or groups, you have to feed 8 quarts (liters) of milk at a minimum as soon as you can,” said Bob James, a professor emeritus with Virginia Tech, during the September Hoard’s Dairyman webinar. “If you feed less, you have hungry calves, and they can start cross sucking.”

He added, “When I see intake on most calves, if raised right and have really good vigor, they are going to be eating 8 quarts (liters) by at least 7 to 10 days of age.”

For James, who now serves as a dairy consultant with Down Home Heifer Solutions, ad libitum access to milk the first 28 days on the feeder is ideal. He has found that some calves will drink up to 16 liters per day. If farms don’t want to provide that much milk, he said a maximum daily allotment could be set at 12 liters.

From Day 28 to Day 32, daily milk should be reduced to 8 liters and then remain at that level until Day 42. This milk reduction is intended to stimulate starter intake and prepare the calf for weaning.

Then, from Day 42 to Day 56, reduce the milk allotment from 8 liters to 2 liters to gradually wean the calves. James, who works with dairy producers around the world, said that this system works quite successfully for many farms.

Milk provided per meal could vary from 1.5 liters for the youngest calves up to 3 liters for older calves. Calves could be permitted to access another meal after two hours.

When deciding between feeding milk or milk replacer in the autofeeder, James reminded, “Consistency is important regardless of what is being fed.”

If feeding milk, “That milk really should be pasteurized,” he emphasized strongly. Even if feeding “good” milk from the dairy, James said there is the potential for some disease agents to pass through that milk.

“My goal is to maintain quality from cow to calf,” he said, noting that milk already starts out with higher bacteria counts than milk replacer.

If feeding unsalable milk from fresh or sick cows, James said a farm must monitor how much milk is available to feed calves and know what will be used to supplement when there isn’t enough unsalable milk available. Also, if a farm has enough unsalable milk to feed all its calves, he said there may be other situations that need to be addressed. James noted that the better farms he works with only have enough waste milk to meet a third to no more than half of their calf-feeding needs.

In addition, James reminded the audience that unsalable milk is not free. “It costs you money to produce that,” he stated, “so it must go into the equation.”

While milk can be used very successfully in autofeeders, James said milk replacers can simplify management. A farm must be willing to pay for quality milk replacer, though, with a minimum of 24% crude protein and fat up to 25%.

Many autofeeders are designed for both milk and milk replacer, and James said, “I think you can be successful with both if properly managed.”

To learn more, watch the September Hoard’s Dairyman webinar, “Raising calves on autofeeders – will it work for you?” This webinar was sponsored by TechMix.