Bulk tank milk turns up “hot” for many reasons

While the causes of antibiotic residues in bulk tank milk vary, the root of the problem often traces back to human error.

The author is a vet who runs UdderWise-Global Mastitis Solutions, United Kingdom. To learn more about the author, visit his website at www.udderwise.co.uk. 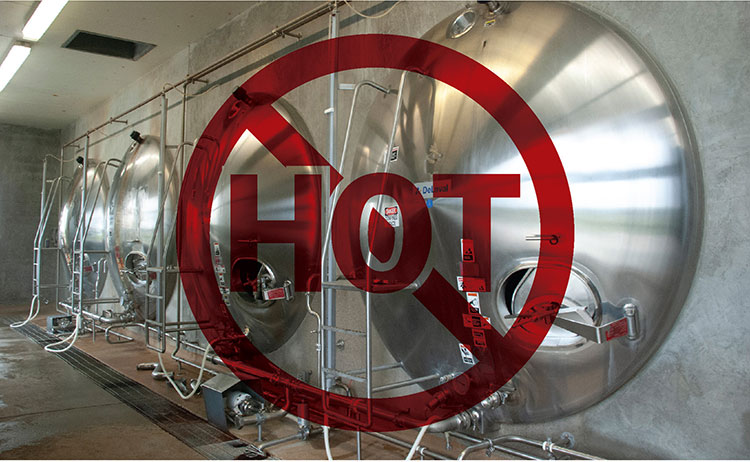 accidental transfer of milk to the bulk tank stood second to incorrectly identifying treated cows when it came to the cause for antibiotics turning up in bulk tank milk, according to a two-year study in Great Britain.

Food safety is a major concern for the consumer. As veterinarians, we prescribe and dispense most medicines, and we have a responsibility to ensure that our farmer clients and their employees are following the correct milk withdrawal periods to avoid residues entering milk. Residues can come from antibiotics and other veterinary medicines. 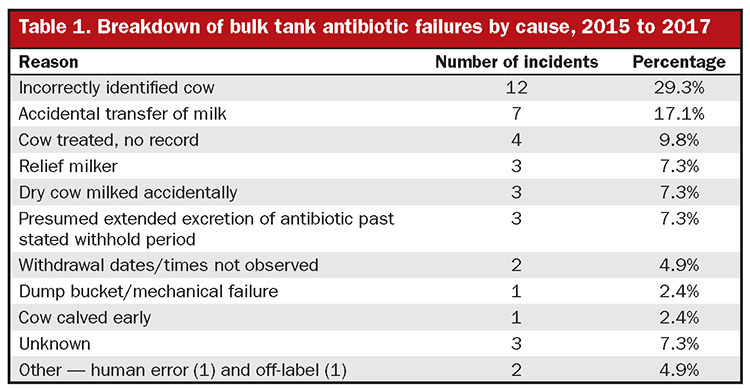 In most situations, human error causes failures. From my observations, failures due to medicine problems are very uncommon. There have been a number of surveys showing the most common causes of failure. Alastair Macrae (and his colleagues at the University of Edinburgh) carried out a survey of bulk tank failures between 2015 and 2017. Farmers were asked to give their reasons for the failures, and the results are shown in Table 1. This analysis shows that all the residue issues in bulk tank milk were due to human error . . . with the exception of three cases where farmers presumed that antibiotic was excreted beyond the milk withdrawal period.

This study also looked at the types of product implicated in the failure, and these results are shown in Table 2. Over 80% of incidents relate to use of intramammary treatments and over half were due to lactating cow treatments.

Incorrectly identifying treated cows. Some farmers don’t physically identify treated cows and rely on memory instead. It can be very easy to forget which animals have been treated and accidentally contaminate the bulk tank. There also are some farmers who don’t have management tags, making identification of treated cows very difficult.

Accidental transfer of milk. Milking cows whose milk needs to be withheld from the bulk tank at the end of milking reduces the risk of residue failures. That’s provided the milk line has been taken out of the bulk tank. For large herds, milking through a separate hospital parlor is better still. If a farmer is milking a treated cow through a receiver jar, which he intends to dump after the cow has been milked, it is very easy to release this milk into the bulk tank. It’s an automatic thing to do after the cow has been milked.

Failure to record treatments. It is easy not to record treatments. Farmers might forget to document some animal numbers when they are drying off large batches of cows. Some staff don’t record all treatments because it’s an easy way to reduce disease incidence and helps stop grief from farm management! In other instances, if a veterinarian is treating a cow, this might not be written into the medicine book.

Not communicating with relief milkers. The relief milker might not be told which cows have been treated, so they milk all cows into the bulk tank. He or she might treat some cows and fail to pass this information on. In other circumstances, a milker might just jot this information down on a piece of paper, which gets lost, instead of writing treatment details in the medicine book.

Accidentally milking a dry cow. There are some farms that mix milking and dry cows. Occasionally, farmers will dry-off some cows, and one might escape or be accidentally put back into the milking herd. Dry cow therapy contains a large amount of antibiotic and can easily cause a “hot” load of bulk tank milk.

Failure to observe correct withdrawal for off-label use. Off-label treatment includes any deviation from the medicine data sheet such as changing frequency, route, dose, or length of treatment. If cows are treated off label, then the appropriate milk withdrawal period must be followed and your vet will advise on how to do this. Keep in mind that some mastitis treatments also are off label if farmers veer off the data advisory sheets.

Failure to observe the correct milk withdrawal periods. Regrettably, every industry has bad actors. There are a few unscrupulous farmers who try to break the rules. They might put milk from treated cows into the tank and rely on dilution, hoping that this milk passes any residue tests. Some farmers do not withhold milk when cows are treated with nonantibiotic treatments, such as some nonsteroidal injections that have a milk withdrawal period. Others might test the milk before the end of the withdrawal period to see if they can put this milk into the tank earlier.

Mechanical failures. Everyone assumes that milking equipment always works. It is not uncommon for valves to become faulty. For example, some milk from the receiver jar can leak into the milking system if the valve at the bottom of the jar is defective.

There are some milking systems where there is a lever switching milk between the milk transfer line and the dump line. If this lever is not working effectively, contaminated milk that should be going to the dump line could enter the general supply and cause a residue failure.

Cows calving early. Medicine records should be checked every time a cow calves to ensure that the milk withdrawal period for each and every dry cow therapy has passed. Often farmers will just check cows that they think calved early. There is a high risk of residue failure if cows treated with dry cow therapy calve early and some of this milk enters the bulk supply.

Drying off a quarter with dry cow therapy and milking the other three quarters. Farmers have been known to dry-off one problem quarter that might have chronic clinical mastitis or a high somatic cell count. They may treat this quarter with a dry cow tube and carry on milking the other three quarters. Under these circumstances, antibiotics can be carried from a treated quarter and secreted through the other quarters, resulting in a failure. Cows should only be treated with dry cow therapy at dry-off. It is essential that all milk from treated cows is discarded.

Intentional contamination of bulk milk. I am aware of at least two incidents where disgruntled staff members intentionally contaminated the bulk tank with antibiotics to cause financial losses and chaos to the farm. In both these instances, extensive investigations were carried out to find out the cause of failure. Eventually, these were traced back to previous staff members.

It’s all in the flow
Milk Quality
Related to:
milk quality
In Milk Quality

It’s all in the flow
By Peter Edmondson

Milk Quality
The 15 key steps to avoid residues in milk

Milk Quality
What is the true cost of mastitis?
comments powered by Disqus