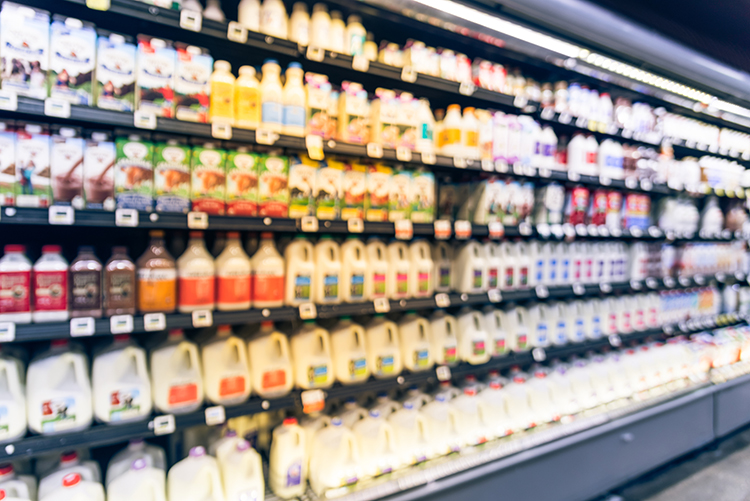 As grocery store shelves continue to fill with bottles, cans, and jugs of every shape, size, color, and ingredient, milk finds itself competing against more and more beverages for a spot in the fridge.

That competition is one of the notable factors USDA Economic Research Service (ERS) researchers pulled out as a driver for the downward trend of fluid milk consumption in a recent report. Demographic and generational shifts in the U.S. population play a role in the pattern, but something else is also influencing food choices, they wrote.

The researchers looked into how children, teenagers, and adults consumed fluid milk in three of the most common ways the product is used: as a drink, with hot or cold cereal, and adding it to other beverages like coffee and tea. U.S. consumers drank less milk and milk-based drinks and used less in cereal when comparing 2003 to 2004 data to 2017 to 2018 data. However, they used about the same amount of milk with other beverages.

Milk and milk-based drinks included products such as kefir, hot chocolate, and eggnog. In 2003, Americans drank about 0.57 cup-equivalents per person per day. By 2009 to 2010, that level had fallen slightly to 0.53 cup-equivalents, but it dipped further to 0.33 cup-equivalents by 2017 to 2018. All three age groups were drinking less milk.

On the other hand, per capita milk consumption with cereal was down mostly among children. On a given day in 2017 to 2018, about 32% of children and 21% of teenagers consumed milk with cereal compared to 16% of adults. The researchers noted that not only is milk facing growing competition in the beverage aisle, but the breakfast aisle is also becoming more diverse. Fewer people are choosing cereal — or don’t make time for breakfast, a trend we saw briefly reversed during the height of the pandemic — and don’t need milk to go along with it. Milk with cereal was estimated at 0.23 cup-equivalents per person per day in 2003 to 2004 but was down to 0.17 cup-equivalents by 2017 to 2018.

Milk maintained its involvement when added to other drinks, holding steady at 0.07 cup-equivalents per person per day over the time period.

Drinking less milk as a child did influence a person to drink less milk moving forward, the researchers said. Milk “alternatives” also chipped away at a piece of market share, though the increase in those sales represented a small portion of fluid milk’s decline.

While Americans are eating three times as much cheese and yogurt as they were in 1970, the slide in fluid milk consumption contributes to a deficiency of dairy in U.S. diets. There are many factors at play in that trend, and a crowded beverage case may just be among the most impactful.