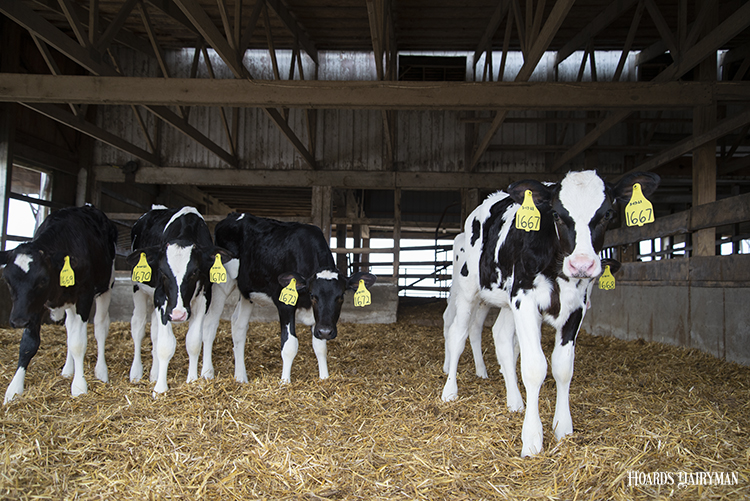 A growing number of farmers are choosing pair housing over individual pens for preweaned calves to capture some of the cognitive and social benefits that can be gained when cattle are raised in groups. If given the option, would calves make the same choice?

A study conducted by researchers in the University of British Columbia’s Animal Welfare Program studied calves’ motivation to get into a pen with another calf. Twenty bull calves were housed in a central home pen with access to two connected pens. One of the pens served as the control and was empty; the other pen contained another calf, which was the reward.

These pens were separated by two identical weighted push-gates the calves could move to access the pen of their choice. The gates were clear to allow calves to see what was on the other side. Each pen was the same size; the same amount of starter, hay, and water was also offered in every pen.

Calves could stay in the central home pen or push through the gates to access either of the connected pens. If a calf pushed itself through the gate into another pen, it was allowed to stay there until the next milk feeding and was then returned to its home pen.

Following a successful push into another pen, the weight of the gate was increased and the pen that contained the other calf was randomized so a calf would not just learn which side housed the companion.

Calves were housed in these pens for 15 days. The animals learned how the work the gates quickly, and all but one calf pushed through a gate on the first day of the trial period. Over the 15-day period, the calves pushed more weight and pushed the gates more often in order to access the pen with the companion calf.

The researchers concluded that young calves appear to be motivated to access a social partner, even at a young age. This natural desire for group housing may be another influencing factor some producers consider when making calf housing decisions.

The futures markets act like a sponge
By Abby Bauer, Senior Associate Editor