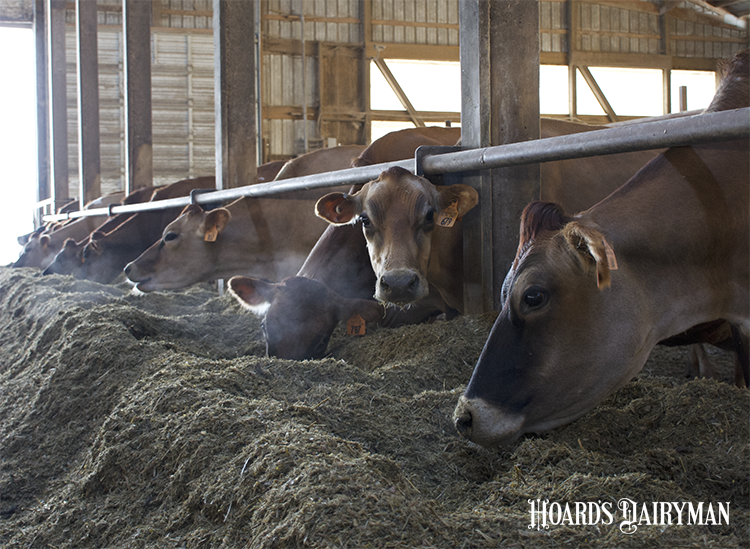 Dairy farming has made great strides in efficiency and reducing its environmental impact. Between 1944 and 2007, the carbon footprint for a gallon of milk has been reduced by two-thirds.

Tom Overton, a professor at Cornell University, said this reflects tremendous gains by the U.S. dairy industry, which reduced cow numbers from 25 million to about 9 million during that time frame. On the flip side, overall milk production, yield per cow, and milk components per cow all grew.

Despite these efficiency advances, animal agriculture still accounted for about 2.5% of greenhouse gas emissions in the U.S. in 2018, with dairy representing about 0.7%. About 75% of those emissions occur on the farm, from crop production, feeding, enteric methane release, and more. “Even though we are a small percentage of overall greenhouse gas emissions, these factors represent opportunity areas,” Overton said during the Cornell Pro-Dairy “Net Zero for New York dairy” conference.

During his presentation, Overton focused on feeding strategies that can reduce methane emissions. Although feeding opportunities exist to cut a cow’s environmental impact, Overton cautioned that milk yield should not be sacrificed.

“Milk yield per cow is really a huge influence of environmental impact and efficiency,” he said. “Anything we do that might decrease enteric methane, we need to be conscious of what impact that might have on milk yield, components, and milk efficiency.”

He continued, “If you decrease methane, but lose milk or components, that is a huge offset moving us back the other way. Keep this in mind for any strategies that you might employ to try to mitigate enteric methane.”

Still, there is room for improvement, and Overton said that feeding strategies is an area of opportunity. He said anything that improves milk per cow, reduces the number of cows needed, or enhances feed efficiency will cut down the environmental impact.

Ionopores- Monensin (Rumensin) is currently available and widely fed in the U.S. Overton said it has been shown to improve feed efficiency 3% to 5%. It is estimated that methane output can be reduced by up to 20%, but the response is variable for reasons we don’t fully understand, he noted.

3-nitrooxypropanol (3NOP) - 3NOP is another feed additive that Overton compared to a “sniper of the methane process” because it directly inhibits the last enzyme in methanogenesis. He said it is a potent additive that requires a low inclusion rate in the diet, which is attractive. Research on this additive is promising but real-world data is limited.

Seaweed - Overton said there is a lot of hype about seaweed and its potential in rations to reduce methane emissions. Studies have found it can reduce methane production up to 98%, but Overton offered a word of caution. “Anytime something effects the microbial ecosystem to the point where the input is decreased by that much, you have to wonder what else is happening in that system,” he noted. He also pointed out that results happening in a laboratory are much different than feeding a product to lactating cows. Still, the potential is there, and current research involving seaweed is being conducted.