Putting nutrients in a condensed package The manure and bedding material removed from a bedded-pack barn can be a valuable nutrient source for crops, but it is bulky. For this reason, this manure is often applied close to the farm, not necessarily on the fields that could benefit from these organic nutrients the most.

Composting is one way to reduce the volume of this manure and make it easier to transport. Eric Richer, a county educator for Ohio State University Extension, secured a Great Lakes Sediment and Nutrient Reduction Program grant and conducted a research project to evaluate the volume and nutrient content of manure composted in dry stack barns, which are popular in northwest Ohio where he works. He shared his finding at the 2022 Waste to Worth Conference.

The project included five farmers who built at least one windrow of dry, solid manure removed from a cattle barn. The windrows were 6 feet tall, 12 feet wide, and varied in length. The manure weight and volume were measured at the start of the project and again at completion.

The windrows were either turned weekly or biweekly for five to eight weeks using an HCL Machine works pull-type compost turner. Richer said turning added oxygen into the compost system, but more importantly, it mixed and grinded the manure and bedding. The turner was pulled with a tractor equipped with a continuously variable transmission (CVT), which was important because the turner was pulled through the compost at a very slow speed of 0.05 to 0.15 miles per hour.

Manure samples were taken to assess moisture level, usable nitrogen, the nitrogen to carbon ratio, and other key nutrients. Temperatures were also tracked to ensure the compost maintained an ideal temperature between 120°F and 140°F.

The project stated with 258 tons of unprocessed pen pack manure from eight windrows. In the end, it yielded 121 tons of finished compost, a 53% reduction in weight. The volume, which was measured by number trucks in versus number of trucks out, declined by 28%. The moisture level of the manure went from 66% to 48%.

Richer said that the total usable nitrogen stayed the same per applied ton of manure. Where significant gains were made, he pointed out, was for key nutrients of phosphorus, potassium, sulfur, and calcium. “These nutrients nearly doubled, if not more, from start to finish, within eight weeks, and some as quick as six weeks,” he shared. “We nearly doubled the nutrient density and made that product more nutrient stable and better for a farmer to carry down the road.”

One goal of the project was to encourage farms to haul this manure to fields farther away, and Richer said on average, it was transported 4.5 miles, with one farm trucking the composted manure 16 miles away.

The farmers worked with Richer to develop a replicated field trial for corn using the composted product. The goal of the trial was to compare a normal rate of manure application to a half rate application of the compost. Richer shared a few examples where there was no statistical difference in corn yield between the two nutrient sources.

Richer said more work is needed to further assess this opportunity to quickly create a more nutrient dense fertilizer source on the farm. Future plans include evaluating more windrow sites and applications on soybean fields, along with an economic analysis of composting plus transportation. 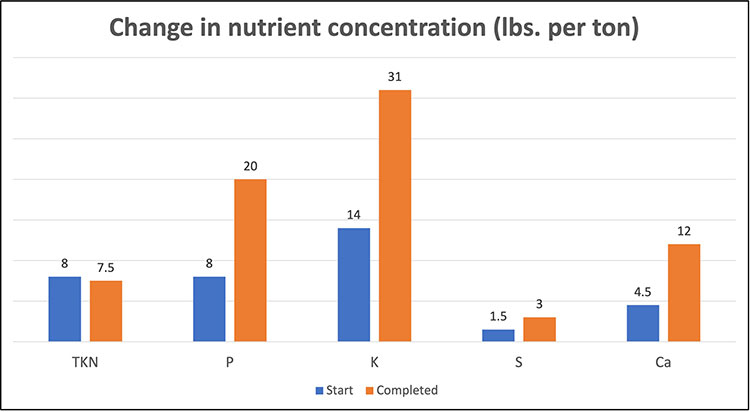 Figure 4. Density of key nutrients doubled for phosphorus, potassium, sulfur, and calcium from the start of composting to the finished product (n=8 sites).
To comment, email your remarks to intel@hoards.com.
(c) Hoard's Dairyman Intel 2022
June 13, 2022
Subscribe to Hoard's Dairyman Intel by clicking the button below
Related