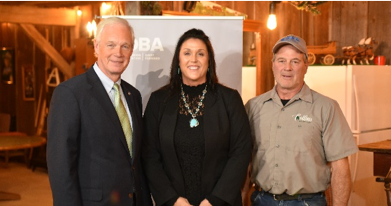 “Sen. Johnson understands what it takes to run a business and that every decision that he makes in D.C. affects businesses around the state, including dairy farms,” Penterman said. “He has stood by family businesses to oppose changes in the tax system that would make it nearly impossible for the next generation to continue farming.”

Sen. Johnson joined DBA for the announcement at Collins Dairy in Greenleaf, Wis. Earlier this month, DBA announced the endorsements of Tim Michels for governor, Eric Toney for attorney general and 74 candidates for the state Legislature.

“Each of these candidates understands Wisconsin’s place as America’s Dairyland,” Penterman said. “They know dairy is critical to Wisconsin’s economy and are committed to helping our farmers thrive.”