The author is a professor and extension dairy specialist at the University of Idaho. 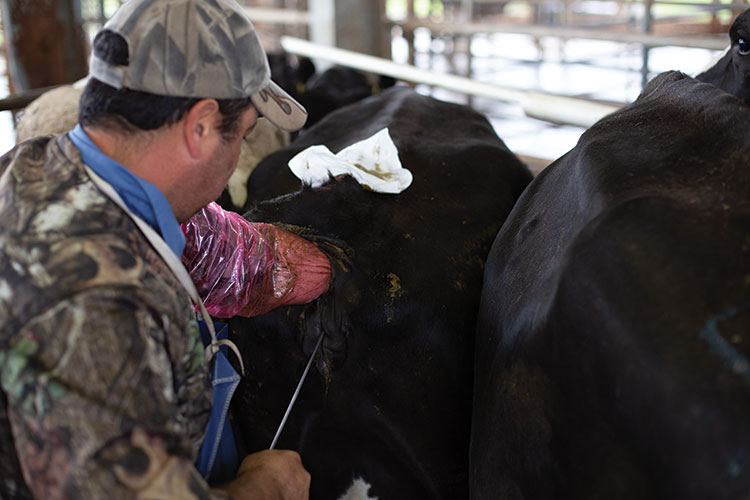 Breeding technicians must be able to manipulate the A.I. gun into the uterine body.

Location matters — in real estate, business, and A.I. During natural service, a mature bull deposits 8 to 10 billion sperm in the anterior vagina, near the cervix of the cow. One of the advantages of A.I. is the use of significantly fewer sperm, usually between 2 to 20 million, per service. However, with this sperm dose, deposition must occur in the uterus for acceptable fertility to be achieved.

In the 1980s, researchers at Penn State University reported that greater than 60% of sperm are lost from the reproductive tract by retrograde flow within 12 hours after A.I. Washington State University researchers found no difference in number of sperm lost (or conversely, retained) following A.I. in the uterine horns as compared to the uterine body. There was, however, a marked increase in number of sperm lost following A.I. in the cervix.

A possible explanation for the positive effect of uterine horn inseminations in a few of the aforementioned studies may be related to the elimination of cervical semen deposition. Cervical A.I. errors account for approximately 20% of attempted uterine body depositions, as reported by Penn State researchers. Canadian researchers reported a 10% decline in fertility to cervical A.I. when compared with deposition of semen in the uterine body.

Next, the technicians inseminated live cows using A.I. guns containing dye plugs. Following slaughter, the reproductive tracts were recovered and dissected, with the placement results shown in Table 2. This provides evidence that further improvement of technicians in this program was possible. A strong relationship between technician accuracy with dye placement into the uterine body and subsequent fertility was also reported.

Following retraining, the greatest improvements in fertility were by two technicians with greater than 35,000 inseminations each. These technicians likely were performing A.I. in a state of procedural drift, defined as a mismatch between procedures and actual practice. One of the most likely reasons for the procedural drift was a gradual deviation from the routine, which then became routine. Retraining, however, allowed for identification of A.I. technique issues, correction of procedural drift, and increased fertility.

The uterine body is the accepted site of semen deposition in A.I. as there is no universal fertility benefit to further manipulation and deposition of semen into the uterine horns. For questions about A.I. training and retraining, contact your semen supplier or local university extension service. Happy A.I. breeding!

The randomness of reproduction
By Joseph Dalton