Are you ready for a drop in the SCC legal limit?

By Stephen C. Nickerson
The author is a professor of dairy science at the University of Georgia.

To comply with global quality standards, consumer demand, and exportation requirements, the dairy industry is striving to improve product quality.

To make this a reality, it is likely that the legal limit for somatic cell counts (SCC) in raw milk will be reduced in the near future. Already, milk purchasers are requiring milk with lower SCC from their suppliers.

In May 2011, a proposal to lower the legal SCC limit from 750,000 to 400,000/ml sequentially over a three-year period was submitted to the National Committee on Interstate Milk Shipments (NCIMS). This proposal was turned down by a very narrow vote. However, similar proposals will be submitted to the NCIMS in 2013, and it is very likely that one will be approved, thereby lowering the legal SCC limit.

The question becomes, "Why lower the limit? Somatic cells are not a human health risk." True, somatic cells, per se, which are mainly white blood cells or leukocytes are not detrimental to human health. But, elevated bulk tank SCC are almost always associated with poor milk quality as a result of management deficiencies. So, it is important to improve milk quality for several reasons: In addition, it must be emphasized that elevated SCCs indicate poor farm hygiene practices, improper sanitation, and mastitis, as well as the potential antibiotic residues. High SCCs are always associated with reduced milk yield, while low SCC milk has a longer shelf life, better taste, and greater cheese yield. Processors shipping to Europe already must prove that each supply farm's SCC is less than 400,000/ml.

It appears that the 5 percent of farms that would have problems complying are those that are located in the southern states. Dairymen in this region will have to adopt stricter methods of mastitis control in order to reduce mastitis and successfully lower bulk tank SCC.

To improve SCC, it is important to understand how somatic cells function and why they are so important to udder health. One major role of somatic cells (leukocytes) in milk is to identify bacteria and kill them; otherwise, these organisms would grow unrestricted in the mammary gland and probably result in gangrenous mastitis.

Good guys and bad guys
To understand this relationship, we need to review the anatomy of the udder and how milk is produced. Just as nutrients are transported from the bloodstream into mammary tissues to be converted into milk, leukocytes are also transported into milk as a surveillance mechanism to look for bacteria. In the typical uninfected mammary quarter, the leukocyte (somatic cell) numbers remain less than 200,000/ml.

Keep in mind that each mammary quarter is composed of millions of microscopic alveoli. Each alveolus is a three-dimensional sphere composed of a layer of milk-producing cells that surrounds a lumen, or collecting space, which drains milk to the gland and teat cisterns before exiting through the teat duct during milking.

In order for leukocytes to migrate from the bloodstream into milk to look for bacteria, they must cross the layer of milk-producing cells surrounding each alveolus and move into the lumen, and this is where they become detrimental to milk production. In the figure, the circulating somatic cell (1) crosses the bloodstream (2) and heads toward the layer of milk-producing cells (3) that lines the alveolus so that it (the somatic cell) can eventually move into the alveolar lumen to look for bacteria (4).

Despite their harmful effect on milk production, somatic cells are very beneficial and absolutely necessary because they do prevent mammary gland infections . . . most of the time.

This article appears on page 14 of the January 10, 2012 issue of Hoard's Dairyman.
Related

Cut back on show season stressors
By Stephen C. Nickerson 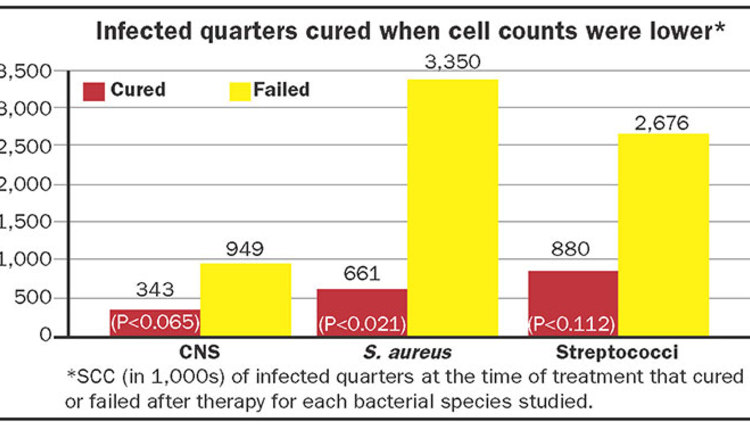 Features
Are you ready for fly season?
comments powered by Disqus