Improve your chances for curing mastitis

By Stephen C. Nickerson     Felicia Kautz     Lane Ely And   Gabrielle Resnick
The authors serve as professor, research associate, professor emeritus, and undergraduate intern at the University of Georgia Department of Animal and Dairy Science.
Trying to successfully treat a case of clinical or subclinical mastitis with intramammary tubes can sometimes be a crapshoot, as cure rates are typically 50 percent or less. So, how can you improve your odds of achieving a cure against the common staphs and streps that cause the majority of mastitis?

An ongoing study at the University of Georgia Teaching Dairy suggests that it is all about the somatic cell count (SCC). For the past 10 years, we have been conducting a research trial to determine what lactating cow antibiotic products, and how long they are infused, result in the greatest cure rates for the common causes of mastitis.

The five lactating cow products that we have been evaluating are Hetacin-K, Today, Amoxi-Mast, Spectramast LC, and Pirsue. Throughout this process, we have been comparing two treatment times:

Extended therapy consists of one intramammary infusion at each of six consecutive milkings, for a total of six infusions. Of course, this treatment must be carried out with a valid veterinarian-client-patient relationship (VCPR). 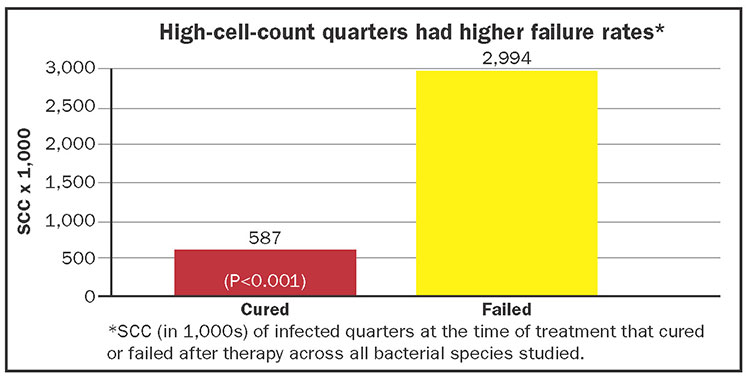 A subset of the data, which included 30 lactating cows, was recently summarized and presented at the College of Agricultural and Environmental Sciences Undergraduate Research Symposium by our undergraduate intern, Gabby Resnick. Results showed that overall cure rate across all five products and two treatment times for all types of mastitis was 41.2 percent. 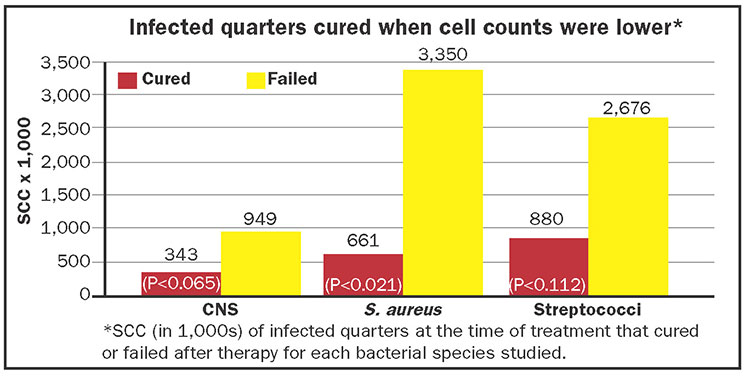 Down on the farm

From a practical standpoint, the most important finding of this trial to date is that infected quarters that cured had lower SCC at 587,000 cells per mL versus those that failed at 2,994,000 cells per mL. Although results are preliminary, we believe that dairy farmers may be able to use these benchmarks when deciding if an infected quarter should be treated. For example, if the SCC ranges from 300,000 to 700,000, then the chances for a cure are good. If the SCC is 2,000,000 to 4,000,000, then the chances are poor, and treatment would not be advised.

It’s all in the flow
By Stephen C. Nickerson

Features
Are you ready for fly season?

Features
Are you ready for a drop in the SCC legal limit?
comments powered by Disqus