By Julie M. Huzzey
The author is a Postdoctoral Research Fellow at the University of British Columbia.

The goal of a total mixed ration (TMR) is to provide a balanced diet supplying the nutrients necessary for maintenance and growth. However, on farms, the quality of the TMR may vary between days (in relation to inputs and mixing), within days (due to sorting by cows or environmental exposure) and along the feedbunk. Recent research at the University of British Columbia has shown that this variability can have profound effects on feeding behavior.

Grazing cows generally search for the best feeds or locations with the highest nutrient density in order to make the most efficient use of their time budget. Often these locations are also associated with highly palatable feed. Searching behavior allows cows to locate higher quality feeding sites, but this exploration adds to the time during which they are not feeding. Frequent searching may make feeding behavior less efficient, reducing the time spent at the bunk and elevating competitive behavior over access to preferred feeding locations. The aim of our study was to measure how TMR quality variation affects the feeding behavior of heifers.

The TMR was a mix of fescue hay, corn silage, grass silage and grain. The energy density of the TMR was modified by adjusting the amount of grain in the mix to 0, 24 or 39 percent of the total dry matter of the low, moderate and high diets, respectively.

By the end of the nine-day study period, all four groups experienced a diet change to each of the three TMR qualities. The average quality of the TMR (across all eight bins) on the three test days was either higher or lower than what the heifers had experienced the day prior, when TMR distribution was nonuniform along the length of the feedbunk.

Inconsistency alters behavior
To determine how variation in TMR quality affected feeding behavior, heifers within each of the four groups were arranged into pairs. Before the morning feed delivery, all heifers were moved to the back of the pen, and then one pair at a time was allowed access to the fresh feed for 15 minutes. Feed bins were refilled after each 15-minute period. The number of times heifers switched between bins and the average time spent at each bin was recorded. The number of competitive interactions (displacements and attempts to displace) that occurred between the heifers was also recorded.

Heifers switched between bins more often when offered a lower energy density TMR than what they were fed previously (Figure 1). In contrast, bin switching was curtailed when TMR was changed to a higher quality. This change in sampling behavior was likely driven by sensory cues from the diet (taste, texture, smell) more so than by gut fill after feeding since the observations occurred within a short period following exposure to fresh feed. 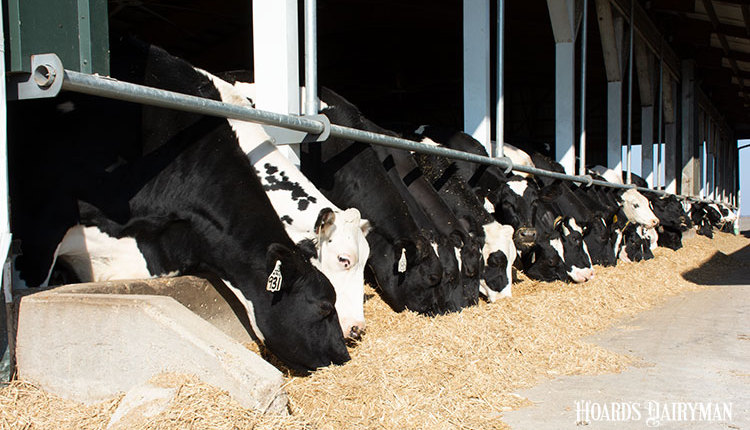