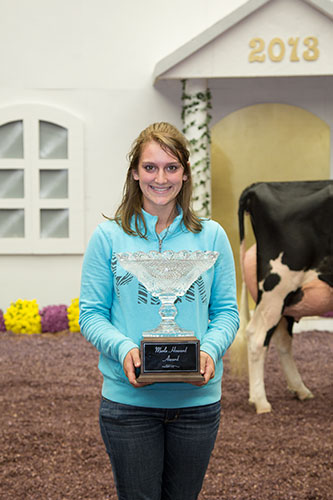 This 20-year-old is a critical member in operating her family's 800-acre dairy farm in southeast Wisconsin and is involved in all phases of the operation. Additionally, she gained valuable experience in 2011 and 2012 when she worked for Ron and Christy Ratliff's Jersey herd in Garnett, Kan.

A very talented leadsperson and is equally gifted with the clipper, Krull recently was won showmanship and fitting competitions at her local county fair on her way to being named Supreme Champion Showman. Additionally, she placed among the top five in showmanship competitions at World Dairy Expo, the Wisconsin State Fair, and was named Supreme Champion Showman at the Southern National Show. Krull also is the first woman to be a leads person at World Dairy Expo's World Classic Sale.

In junior breed programs, Krull was named a Distinguished Younger Junior Member by Holstein Association USA in 2010 and just this year, she was named the 58th National Jersey Youth Achievement Award winner. Previously, she served as the National Jersey Queen.

Above all, this young lady is a hard worker, who fits and prepares her own animals for the show each year. She has had success in three breeds and owns 40 head. In 2010, Krull showed her bred and owned cow Krull Dundee Ellory-ET who went on to be named honorable Mention Senior Champion at World Dairy Expo's International Junior Holstein Show. The next year, her 3-year-old Jersey, Ratliff Sambo Demi-ET took home third-place honors in the National Jersey Jug in Louisville, Kentucky. And just this year, Krull Larson Dirty Girl-Red was named Reserve Junior Champion of the Junior Red and White Show at World Dairy Expo. Krull is a sophomore majoring in animal science and agri-business at the University of Wisconsin-Platteville.

Return to Hoard's at Expo page.