Even though Europeans eat four more pounds of cheese than Americans each year, there is wide variation in individual consumption across the continent. 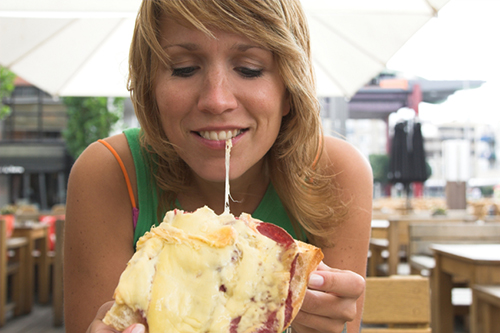 Americans have developed a tremendous taste for cheese over the past 30 years. In 1980, domestic cheese consumption stood at 17.5 pounds per person. Thanks in part to growing demand for Mozzarella via pizza sales, cheese consumption jumped to 25.9 pounds by 1992, 30.5 pounds in 2002, and 33.5 pounds last year which is a new watermark. Despite our nation's growing appetite for cheese, we still don't consume as much as those living in Europe.

Europe as a whole consumes 37.6 pounds of cheese per person based on the latest information released by the European Commission and prepared by Ernst & Young. That 37.6 average represents just over 4 pounds more per person than those living in the states.

Even so, there is great variation in cheese consumption within the 27 member countries found across the European Union. At the top end, Greece leads the pact as each citizen eats 60.9 pounds of cheese. The Greeks are followed by Luxembourg at 58.7 pounds; France, 56.6 pounds; Germany, 50.8 pounds; and Italy at 48.4 pounds.

On the flip side, the average Romania consumes only 11 pounds of cheese. Bulgaria, 13.3 pounds, and Ireland, 15.6 pounds, round out the lowest three cheese-consuming nations in Europe.

Looking beyond the crown
HD Notebook
Related to:
HDN, cheese
In HD Notebook