The NFL announced another 5-year commitment to the program that encourages healthy eating and physical activity in schools across the nation.

You could feel the excitement the minute you entered the door at Pulaski International School in Chicago, Ill., yesterday. It was a special day for the students and staff, as they were hosting a Fuel Up to Play 60 event at their school.

Fuel Up to Play 60 is an in-school nutrition and physical activity program that was launched by the National Dairy Council (NDC) and National Football League (NFL), in collaboration with the U.S. Department of Agriculture (USDA). The program encourages youth to consume nutrient-rich foods and achieve at least 60 minutes of physical activity every day. 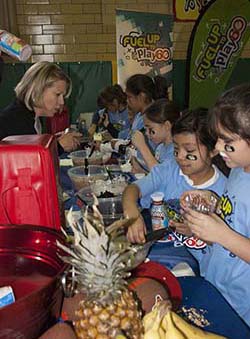 Their motivational messages were followed by time for physical activity. Students had the chance to move through several football-themed stations and play games with former Chicago Bears players Otis Wilson, Hunter Hillenmeyer and Anthony Morgan. The morning concluded with a healthy yogurt parfait snack.

The enthusiasm for the program goes well beyond the students. Messer, who is also a North Dakota dairy farmer, has been to a few Fuel Up to Play 60 events before.

"This is a program dairy farmers dream of," he said. "It gives us a venue to be in schools. There is a lost connection between consumers and farms. This is a vehicle for us to be in the classroom, delivering our story."

As a parent, grandparent and former school board member, Messer knows the importance of having children in schools that are "attentive and ready to learn" and the role good nutrition plays in their classroom success. "As dairy producers, it is our goal to produce nutritious, healthy foods," he said. "Partnerships with the NFL and other companies allow us to take promotion to the next level."

Messer is appreciative of the support the program receives. "Players could do a lot of other things with their time, but they use their time to be a part of something that allows children to be better," he said.

Hillenmeyer, a former Bears line backer with two daughters of his own, said that participating in Fuel Up to Play 60 and other National Dairy Council activities "is a no brainer" for him. When he hears about the positive impact the program has and sees the enthusiasm of the National Dairy Council, it makes sense to use the NFL's power to promote a good cause, he explained.

With the support of the NFL, former players, the National Dairy Council, dairy farmers, teacher volunteers and more, Fuel Up to Play 60 programs are in 73,000 schools today, encouraging more than 14 million students nationwide to eat better and be more active.