There’s more to breeding Red and Whites than we thought

In addition to the traditional red carrier gene, Black-Red, wild type and dominant red have all entered the equation. 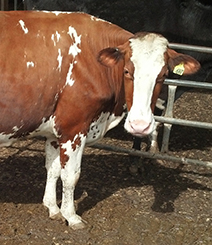 Most of us grew up being taught that there was one gene and two alleles involved in the coat color of our Holsteins . . . with the black allele being dominant over the recessive red allele. To determine the odds of getting a Red and White Holstein (two recessive red alleles coming together), we would use a tool called a Punnett Square and follow the Mendelian inheritance of those alleles. Those were simpler times. Today's students, both young and old, have a bit more of a challenge than we did to understand the genetics of coat color in today's Holsteins.

For a 100 percent guarantee . . . breed two red and whites to one another. Since both the male and female carry two copies of the recessive allele for red coat color, the coat color of the offspring will be red and white.

For 50 percent outcome . . . breed a Red and White male or female (two copies of the recessive gene) to a black and white Holstein that carries the allele for red coat color (one copy). The Red and White would always pass along the recessive red allele to its offspring while there would be a 50-50 chance the black and white parent (who is a red carrier) would pass on the red allele . . . hence a 50 percent chance for a red offspring.

Things began to change a few decades back when Roybrook Telestar and his popular son Hanover-Hill Triple Threat, born in 1972, came along. When Triple Threat was used as a mating sire to make a red calf, some of the offspring started out red and turned black as the individual got older . . . usually by 3 to 6 months of age. However, many kept some red hair around their eyes, nose and topline. Over time, geneticists came to label this condition as Black-Red.

All was calm on the red front until the turn of the century. That is when the "wild-type" red allele began popping up again in the Red and Whites. In modern-day genetics, the "wild-type" allele traces back to Aggravation Lawn Boy P-Red born in 2002. Other sources have been the Cherry and Scarlet cow families and genetics from Hickorymea.

That's the story on the Recessive Red gene. However, there is a new story unfolding with a Dominant Red allele or what some call the "mutant gene" or "variant red".

While all previous coat color tests have looked at chromosome 18, Dominant Red is found on chromosome 3. As its name implies, an animal receiving a single copy of the dominant red allele from one parent will be red. This gene truly warrants being called Dominant Red because the dominant red allele will "dominate" all other coat color alleles. If an animal has even one copy of the Dominant Red allele, it will be red, even if the traditional gene is coding for black hair. Simply said, Dominant Red trumps all other forms of red color.

Moving forward, the University of California-Davis Veterinary Genetics Laboratory is now able to provide breeders with a test to determine the genotype of your animals. The order of dominance of the alleles for each of the two genes is given below:
DR = Dominant Red
Recessive Red modes of action:
ED = Black and White gene
EBR = Black-Red gene
E+ = "Wild-type" red
e = carrier of recessive red

Which platform is best to connect with consumers?
HD Notebook
Related to:
HDN, genetics, breed news
In HD Notebook

What does sustainability mean for the next generation?
By Corey Geiger, Managing Editor