Saving the world one slice of cheese at a time 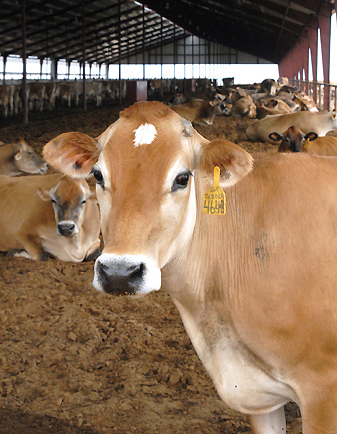 They don't wear capes or have super powers, but little brown cows are helping save the world. Seriously. Here's how the dots are connected:

• People around the world like cheese, and they like it a lot. Demand has been growing for decades and shows no signs of stopping. In the U.S., 40 percent of all milk is already made into cheese.

• The vast majority of cheese is made from milk produced by cows.

• As is the case with humans and all other mammals, cows consume water, food, and other natural resources. Cows also have a "carbon footprint" that negatively impacts the environment through production of carbon dioxide and other waste.

• Jersey cows (the little brown ones pictured above) produce milk containing much higher levels of protein and butterfat than milk produced by other breeds, most notably Holsteins, which account for about 90 percent of all dairy cows in the U.S.

• More protein and butterfat means more pounds of cheese can be made from an equal amount of milk, which means less energy and other resources are used by the cheese plant.

• In the case of Jerseys, less feed and water are needed to produce milk, less waste is produced, and less carbon dioxide is emitted into the atmosphere.

• The bottom line, according to animal scientist Dr. Jude Capper at Washington State University, is the carbon footprint of Jerseys is 20 percent smaller than Holsteins. "Not only does the Jersey population conserve resources needed for cheese production, the total environmental impact is lower," she said in a July 13 presentation at the American Dairy Science Association annual meeting in Denver.

There you have it; that's how Jersey cows are helping save the world one slice of cheese at a time.
Related