What you cannot see can kill them 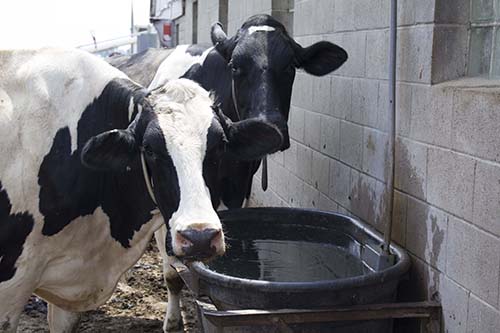 "My cows are dying. What is going on?" sobbed the 65-year-old dairy producer as his cracked hands cradled his cheeks and covered his swollen eyes. "They calve, get weak, have trouble getting up, then they just give up trying."

Water is the most critical nutrient in dairy cattle, especially in the summer. Maximizing water intake during warm weather helps to minimize drops in production. But, it was not summer.

Water should be cool, clean and readily available. Positioning troughs out of direct sunlight can aid in keeping water temperature desirable and maintaining consumption. There were adequate troughs and all under cover. That was not the problem.

But what happens when cow health and production seem to be faltering? Check the water and feed. And so they did. Water samples came back from the lab with no anomalies, feed samples showed no toxicity, and autopsies gave no signs for death.

Veterinarians, nutritionists and consultants all spent time evaluating the cows, the environment and herd management. They tried everything and everybody. No one had any solutions . . . for two years. Plenty of unanswered questions and "I'm sorry, I have no idea what is going on" from industry experts. Cows and calves continued to perish. Milk production on the remaining cows plummeted.

A college classmate from four decades earlier finally gave a lead. "Have you had the water tested?"
"Yes. The results were normal. Where would you suggest we send another sample?"

So, a water sample was sent 2,000 miles away for testing. Earlier tests were expensive and not as comprehensive as this one, but this time, the silent killer was identified. And then things changed.

The lab called with the results, "Who is drinking this water?"
"The cows," replied the farmer.
"What about people? Do they drink the water?"
"Oh, yeah. We drink it, too."
"Anybody sick?"
"Just the cows."
"The manganese levels are 12 times the safe limit, and the iron level is 150 times the safe level!" they reported.

The source was found. Now it was time for a solution. Immediately food-grade hydrogen peroxide was manually added to water troughs. (Not an easy item to find.) There was no guarantee that drilling a new well would solve the crisis. A system to automatically monitor and add hydrogen peroxide to the water was researched, purchased and installed a few weeks later. It netted some cow health improvement, but excess iron had been accumulating in the animals' bodies for years and there was no quick fix. Calves, a few weeks to months old, were not immune to the water situation. They, too, became lethargic and could no longer stand.

It did not impact every animal the same, primarily targeting the high producers – the ones consuming the most water. It will take years to double the milking herd size to replace those lost to iron toxicity. The internal health of the young replacement animals is unknown.

Water is vital and is "the clear gold" that fuels dairy production. When cow health and production seem a bit off, dig for the source. It took a long time, too long, for the origins of the problem to finally be detected, but finally it was discovered. Keep looking for answers; some are hard to find.

Water testing, with iron concentration in particular, is an important item to consider. The inexpensive $35 test (plus shipping) saved hundreds of animals that people and other tests could not uncover.

The rebuilding process will be slow, but overall animal health has dramatically improved since the new water system was installed 18 months ago.

Make the most of your assets
HD Notebook
Related to:
HDN, animal care
In HD Notebook