Judge Michael Heath selected his champion from the 197 entries exhibited. 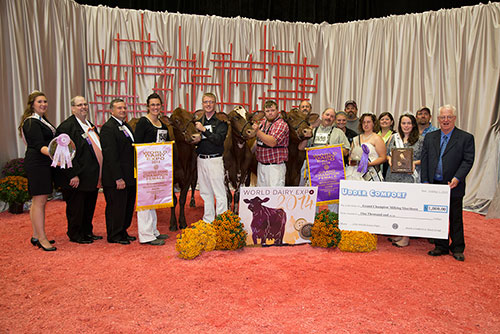 With his usual gusto, Michael Heath had the music turned up in the ring and headed toward the four cows he had pulled out for Grand Champion of the show. He walked the group once then doubled back to slap the winning aged cow, Hard Core Rebel Rockette, owned by Cor-Bloo Syndicate of Cory, Ind., as Grand Champion of the International Milking Shorthorn Show.

"She just has class," described Judge Heath. "She has so much breed character about her head and a sweet udder."

In the heifer show, Lazy M Pirelli Got It-EXP, owned Lazy M Farm LLC - Michael and Heman Maier, Stitzer, Wis., had what it took to be named Junior Champion of the show. The winning fall yearling, Topp-View Moonshine Alexa, owned by Keaton, Kinley and Madelyn Topp of Botkins, Ohio, was named the Reserve Champion.