No holes in the Swiss champion

The cows paraded in with the traditional fanfare of the New Glarus Yodel Club and the Swiss bells around the cows' necks. As the yodeling was completed, judge Eric Topp described the cows pulled out for grand champion of the show as the type of cows that he and associate judge Sherry Smith love to see.

Judge Topp had nothing bad to say about Eloc Wagor Kandid, owned by Ken Main and Peter Vail of Copake, N.Y., which took home the banner for Senior and Grand Champion of the International Brown Swiss Show.

"Well, I don't know what you would want to change on this cow," judge Topp said about Kandid. "That rear udder just makes me want to cry." 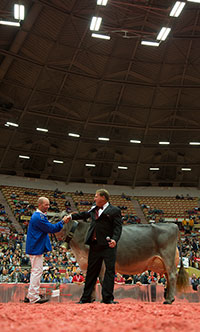 Grand champion was the culminating honor for Ken Main and Peter Vail, but the duo also exhibited the Intermediate Champion Cutting Edge Elite Fayann, also named Honorable Mention of the show. Judge Topp complimented the bright future of this young cow. Additionally, the pair took home premier exhibitor of the heifer and cow show and premier breeder of the heifer show.

Brown Heaven Glenn Fantasy, owned by Brown Heaven of Verchères, Quebec, was tapped as the Reserve Champion. He described the 4-year-old as a cow that followed the grand champion very nicely.

"This cow is the epitome of dairyness and wears a beautiful udder," judge Topp said.