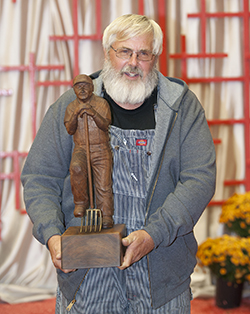 This humble and behind-the-scenes guy has a passion to help others succeed. What's more, Galgowski has never missed a World Dairy Expo and his passion for the show is evident by his hard work and the ongoing support he provides.

The 24th Duncan MacKenzie Award winner's journey began when he grew up on a Connecticut Guernsey farm. After graduating with a degree in dairy science from the University of Wisconsin-River Falls, Galgowski worked at the university's dairy and recently retired as herdsman. Additionally, he has likely worked with more Guernsey Grand Champions at World Dairy Expo than any herdsman by working with the Four Winds string that has included 11 Grand Champions, one Reserve Supreme Champion and the most Premier Breeder banners of any breed. In fact, the Clark and Joy Vilter family trusts Galgowski with every aspect of the show, including clipping, washing, bedding, milking and strapping the cattle in the prized show herd.

Many people also know Galgowski as a "Master Banker." Anyone who has seen the Four Winds display knows that he works tirelessly to keep the exhibit looking its best, always squaring off and tidying the pack, sweeping the alleys and organizing the storage areas. Perhaps most importantly, Galgowski is known for the smiles he generates, the jokes he tells and the friendly greeting he gives visitors who come through the barn.

Above all these accomplishments, Galgowski exemplifies all the principles of a Duncan MacKenzie recipient as to character, sportsmanship, ability, and endeavor.