Take a cue from the French

Cheese and other fermented dairy products may play an active role in a heart-healthy diet. 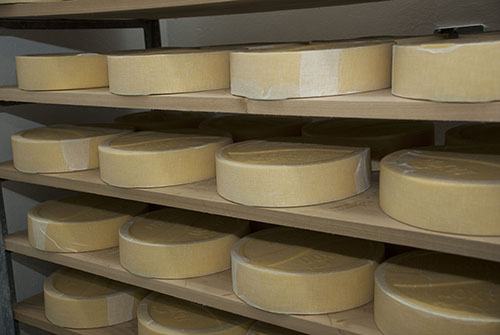 I think it's safe to say that many of us cheese lovers are at least a little envious of people in France. With a diet that typically contains ample amounts of bread, cheese and red wine, the French still boast a lower rate of coronary heart disease and death than many other countries. How can this be possible for the average French person who eats 57 pounds of cheese per year? (Americans, in comparison, consume about 34 pounds annually.)

Sometimes called the "French Paradox," scientists have tried for years to understand the reason why a diet fairly high in saturated fats seems to work for this European country. It has often been thought to have something to do with the red wine, but more recently researchers are turning their eyes towards the cheese.

A research team in Denmark led by Hong Zheng from the Department of Food Science at Aarhus University analyzed and compared fecal and urine samples of men after the consumption of milk, cheese and butter. They wanted to learn how the body metabolized dairy products and how blood cholesterol levels were affected.

There were three groups in the study. All participants ate the same amount of calories and fat each day, but group one's diet included 1.5 percent fat semi-skimmed milk, and men in group two were fed 1.7 grams of cheese from cow's milk daily. The third group was the control, and they consumed butter but no other dairy products.

When people ate more dairy, especially cheese, their microflora (the population of bacteria in the intestine) appeared to change. The researchers noticed higher levels of metabolites like butyrate and propionate, which are connected to the metabolism of microflora. They also noticed lower levels of TMAO, a metabolite produced when the body processes choline.

Less TMAO is a good thing; past research has shown that TMAO may help transport cholesterol to the arteries. Based on this Danish study, it seems cheese and milk may help modify gut bacteria to lower the production of TMAO and also change the composition of lipids in the blood.

The researchers are not exactly sure why, but these results were even more prominent in the cheese-eating group. It is possible that gut microbiota is stimulated in different ways depending on the fermentation level of the dairy product consumed.

The study was small in size, so more research is needed before definitive conclusions can be made. Still, it seems that the French might be headed in the right direction when it comes to enjoying dairy, especially cheese, on a very regular basis.