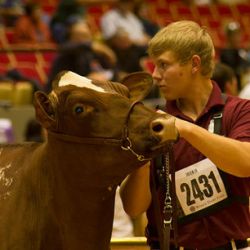 The Youth Showmanship contest, held September 30, 2010, at World Dairy Expo used to include a knowledge quiz and fitting contest. This year though, the latter were eliminated and the contest is now based solely on a youth's ability to show an animal.
Over 250 youth from 25 states and Canada participated in the competition. The event featured three age brackets in which youth could showcase their cattle exhibiting skills. The junior division hosted youth from 9-12, the intermediate, youth aged 13-15 and the senior division youth ages 16-18.
Judging the junior division was Jenny Mills of , Canastota, NY. Of the 64 participants in the junior division, Kyle Barton walked away the champion. Barton hails from Ancrumdale, NY. Winners in the junior division are awarded the W. Terry Howard Award.
Judging 80 participants in the intermediate division was Cathy Yeoman of Dover, Okla. Cyrus Conrad of Sharon Springs, NY won the division and won the Howard Voegeli Award.
The largest division, with 109 participants, was judged by Josey Morris from Lake Mills,Wis. Nicole Ballweg of Dane, Wis. took honors in the senior division. She was presented the Keith King Award and a new semen tank.
Related Patience is a virtue
HD Notebook
Related to:
HAE, WDE, youth, showmanship
In Hoards at Expo