By Abby Bauer, Senior Associate Editor
"There's one cow that lit me up today," said Lynn Harbaugh, judge of the 2015 International Guernsey Show. "She has it all. She's all quality, with dairy strength from end to end and a beautiful udder." 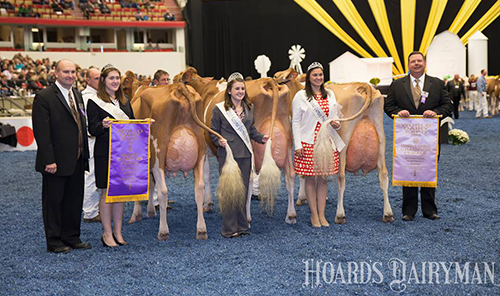 She was Misty Meadows Levi-Suede-ET, the Junior 3-year-old owned and exhibited by Beth Anne Clark of New Paris, Pa. She was named Intermediate Champion and Grand Champion of the 193 Guernseys shown at this year's World Dairy Expo. She also received Best Udder and Best Bred and Owned honors. 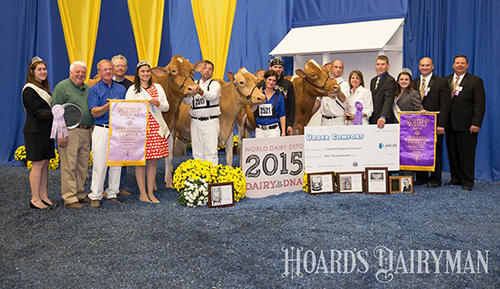 In the Junior Show, Knapps Regis Tambourine-ET rose to the top of the 67 junior owned animals. She was owned and exhibited by Austin & Landen Knapp of Epworth, Iowa. Dix-Lee Kojack Fawn, owned by Whitney Lee Yerina, was the Reserve Grand Champion and Intermediate Champion Female of the Junior Show for the second consecutive year. Reserve Senior Champion was awarded to Prairie Moon Y Antebella, owned by Landon and Leslie Sivesind of Waukon, Iowa.

Hoards at Expo
Another scoop of success for Malt in the Guernsey show
...
comments powered by Disqus