Do you have the guts to bet the farm?

By Patti Hurtgen, Online Media Manager
"You are betting all your points in Final Jeopardy," stated the moderator when speaking to California's Alexandra (Alex) Gambonini. 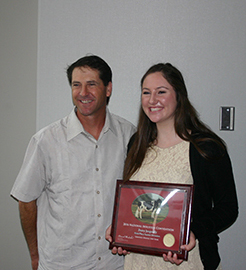 The 120 points tallied from earlier matches were tied with another competitor entering the last stage of the competition. It was her choice to "bet the farm" and risk all her points to assure herself at least a chance at the Jeopardy title. Or end the competition with no points.

The other competitors played it safe and gambled small wagers. Even with correct answers, they could not catch the eventual winner from California. Alex bet big and won big, taking the Senior Division Jeopardy title to go with her two National Holstein Association Dairy Bowl Championship wins from years previous. She is pictured at right with her dad, Frank.

In the Intermediate Division, the scenario was similar. The second-place participant had 90 points. The leader had 150. In order to win, he had to risk a lot - and he risked it all and hoped the leader was incorrect or wagered small. But the outcome was different in this match. After giving the wrong answer to the Final Jeopardy question, he was left with no points on the board and slid to sixth place. This young man from Illinois, a seasoned dairy bowl participant and captain of last year's National Championship Junior Team, could have made a conservative wager, even with an incorrect answer, and would have preserved his second-place spot.

Both individuals are very competitive and had obviously studied a great deal to advance to this level. But if you take risks, you need to be prepared for both possible outcomes. While one was elated, the other was disappointed. There were no outbursts, no tears. It was just matter-of-fact, you win some, you lose some. In the case of the young man from Illinois, I am sure he'll be back next year.

In the dairy bowl contest, previously undefeated New York seniors would face California in the finals. The Golden State's only defeat the previous day was to the team from the Empire State. After California defeated New York in the first match of the finals, it earned a rematch in the double-elimination, winner takes-all event.

The match was intense.

A comfortable lead, then catch up, and then bonus questions. The match had all the drama the participants, coaches, officials and the audience could handle. Up by 31 points (correct answers are worth 15 points, but bonus answers are awarded partial credit), California had the lead with three questions remaining. New York quickly got two correct answers in a row. That left a one-point advantage to California with one question remaining . . .

New York gets it right, they win.

If they get it wrong, it's a loss.

They can hope the other team buzzes and gets it wrong, giving New York a win. If both teams do nothing, it is a West Coast victory.

Don't buzz in and hope New York did not know the answer. Or buzz in to solidify a California celebration with a correct answer. An incorrect one would give New York the victory.

There were a lot of moving parts and strategies in those final few seconds. The question was read . . . Silence . . . The 10 seconds were nearly expired, and then a buzzer was activated . . . Watch and see the outcome.

Having no regrets, playing it safe, or going for it are options in our daily decisions, not just in youth competitions. But when it comes down to it, do you want your fate in someone else's hands or your own?