Tears of joy flowed at ringside as the Grand Champion winner was announced by Judge Molly Sloan at the conclusion of the International Ayrshire Show. Margot Patagonie, the winning Aged Cow, was presented with Grand Champion honors. Patagonie was bred and owned by Ferme Margot of Ste Perpétue, Québec.

After the traditional playing of the bagpipes, shouts of excitement echoed in the Coliseum as Patagonie circled the ring with her new Grand Champion banner.

Judge Sloan complimented the Ayrshire breeders on their “Phenomenal quality from top to bottom,” as well as upping their numbers by 22 percent, one of the biggest Ayrshire shows in years. With the conclusion of the 2016 World Ayrshire Conference taking place at World Dairy Expo, seats were full as Ayrshire enthusiasts packed the stands.

In the Junior Show, Cedarcut Burdette Clove Colata took Grand Champion honors for the second consecutive year. Colata, who was the winning 4-year-old cow, was bred and owned by Erin Curtis-Szalach of Cazenovia, N.Y. No newcomer to the Grand Champion stage, Colata and Curtis-Szalach will once again shine beneath the spotlight at the Supreme Champion Junior Show.

GVP Dreamer Gabriella-ET, a Spring Yearling Heifer, was announced as the Junior Champion Ayrshire and is owned by David and Linda Hanson and Palmyra Farm of Hagerstown, Md. Meanwhile, Woodman Farm Lochinvar Adele, was also presented with the Reserve Junior Champion award. 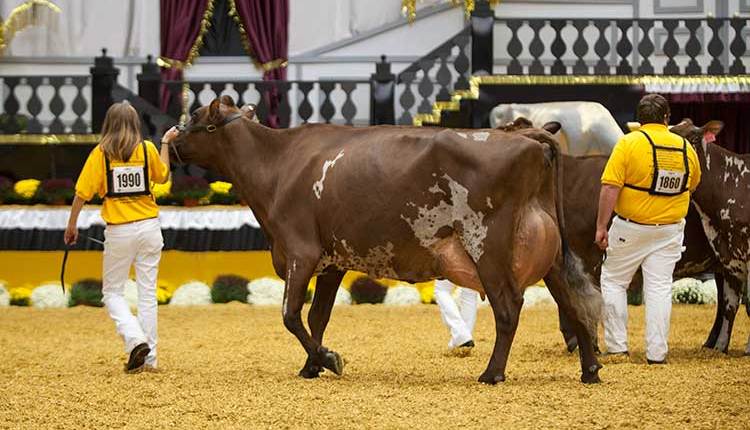