Calving early may not be the answer 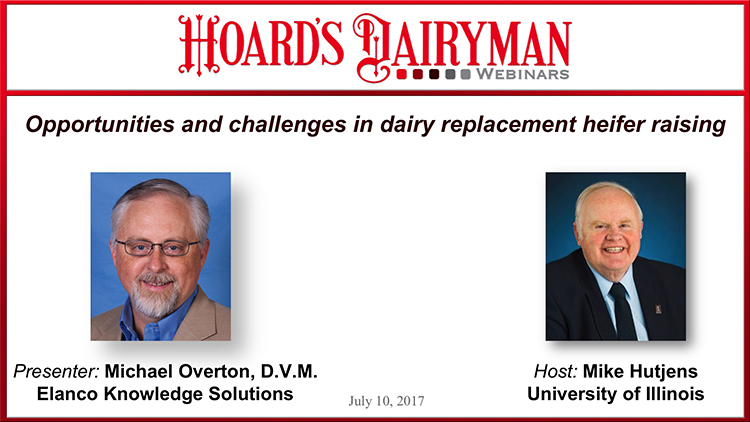 To be successful, or profitable, raising heifers to first calving includes three areas of consideration – nutrition, health, and reproduction. Together they help heifers reach proper body size and weight for breeding and calve at 22 to 23 months of age.

Michael Overton, D.V.M., presented “Opportunities and challenges in dairy replacement heifer raising” during the monthly Hoard’s Dairyman webinar. He addressed the management and financial side of this pivotal age group.

The cost of raising a Holstein replacement heifer is between $1,850 and $2,300. That includes the cost of the calf, estimated at $150 for a heifer. (Bull calves are obviously less.) “Many underestimate the full cost of heifer raising,” shared Overton. Those who pasture young stock may have a lower feed cost, but slower gains may be realized and the opportunity of using the land for other, more profitable endeavors is lost.

Overton suggests that breeding size is 850 pounds and 51 inches tall for Holsteins. When looking at weight gain, he chooses to focus on “current daily gain” and not average daily gain, as there is typically a dip in gain two weeks postbirth, and the animal’s current weight gain is a greater predictor of future growth.

For optimal efficiency, cull heifers after three to four unsuccessful services, or no more than six cycles of breeding opportunity. He also cautions against putting heifers that do not conceive in a timely manner with the bull. These heifers would have been culled otherwise and you are just propagating poor fertility in your herd.

The age at first calving “sweet spot” is 22 to 23 months for Holsteins. For Jerseys, that number would be about one month less. Overton expressed interest in studying more Jersey herds, but research availability is limited.

Some producers are aggressive and calve heifers very early so they can take advantage of additional milk production in those early months. According to research, the second lactation milk production is higher for those that calved later (greater than 23.7 months). However, you could also be giving up reproductive efficiency in the next lactation, too. To complement waiting a bit longer to freshen heifers, there is a lower culling rate in later lactations for late calvers.

So while pushing the envelope for earlier calving may seem like a path to greater efficiency, the data does not necessarily support that. Numerous charts with research data are provided in the webinar. Past webinars are also available for review.

Mike Hutjens
Join Us for Next Month’s Webinar:
Join us for “Driving dry matter intake on dairy farms” as Mike Hutjens, University of Illinois, presents on Monday, August 14, at noon (Central time).

Dry matters intakes continue to be a leading contributor to calf growth, dry cow health, and lactating cow productivity. Hutjens will delve into the dry matter intake guidelines, including risks and rewards related to metabolic disorders, fertility, and milk production. The webinar is presented by Diamond V. To register visit on.hoards.com/New-web-signup.

Which platform is best to connect with consumers?
HD Notebook
Related to:
HDN, webinars, heifers, reproduction
In HD Notebook