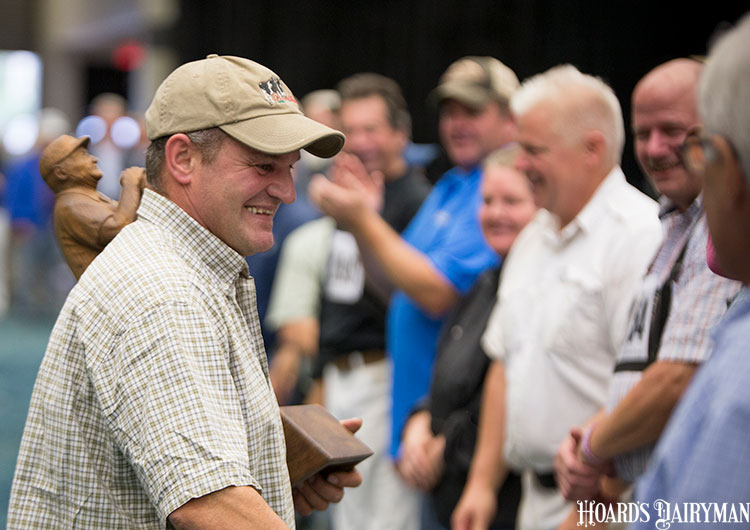 Paul Petriffer is congratulated as the 2017 Duncan MacKenzie Award winner by previous honorees.

Paul Petriffer of Funes, Italy, was presented the 27th Klussendorf-MacKenzie Award during the 51st World Dairy Expo, in memory of Duncan MacKenzie, the 1961 Klussendorf winner.

With this year’s vote at its Thursday morning meeting held at World Dairy Expo, the Klussendorf and MacKenzie group put the “World” into World Dairy Expo and the Duncan Mackenzie Award by selecting its first MacKenzie winner from outside North America truly reflecting the changing landscape of dairy cattle shows.
Since making his first trip to North America as a teenager, with a willingness to learn and carrying a friendly attitude to this very day, Petriffer has been the go-to guy for many of North America’s finest show herds. During working at the past 25 of the 30 World Dairy Expos, Petriffer has worked top herds, including Rosedale, Keightley Core, Carousel, Lylehaven, Lookout, MD-Hillbrook, Dupasquier, Stanhope-Wedgewood, and the Walkerbrae show strings.
Likewise, the list of champions that this man has prepared would fill a book. In fact, Petriffer probably has laid a brush on more champions worldwide than anybody in the business. This is just a partial list of the great cows he has worked with in North America — Buggs Blackstar Buffy, Quality Ridge Stormi Hazel, Responses Wonder, Leduc Broker Mandy, and Kinyon Linjet Ideal. On top of that, there are Lavender Ruby Redrose, Vandyk-K Integrity Paradise, and Waymar Patrick Nadine who were all named Supreme Champion on World Dairy Expo’s colored shavings. Outside of North America Petriffer has worked with more champions worldwide in the past 20 years than any other cowman.
One of the most popular people in the dairy cattle show business, Paul Petriffer, known to many at shows at “Paulo,” served as associate judge at World Dairy Expo’s International Holstein Show in 2009, and his selection for this award marks the first time a Duncan MacKenzie winner has been selected from outside of North America. Most importantly, Paul exemplifies the standards that made Duncan MacKenzie the forebearer of this award.

The author is the managing editor, and he brings 20 years of industry leadership to our readers overseeing all editorial content and production of the magazine. His degree from the University of Wisconsin-Madison combined dairy science and agricultural economics.