There were siblings on teams from Georgia, Arkansas, Minnesota, Pennsylvania, Wisconsin, and North Carolina, but no one had quite the showing of Alabama’s Gavin and Ethan Rankins. Gavin earned the highest written test score, and younger brother Ethan was second. The brothers live on one of the just 35 dairies left in that southern state.

Together with their teammates Rice Nichols and Nathan Gullatt, they gave Alabama its highest finish, second place, in the National 4-H Dairy Quiz Bowl contest. The state had participated in six other national 4-H contests, but had never ranked in the top six teams. They were coached by Angela Nichols and Theresa Gullatt. 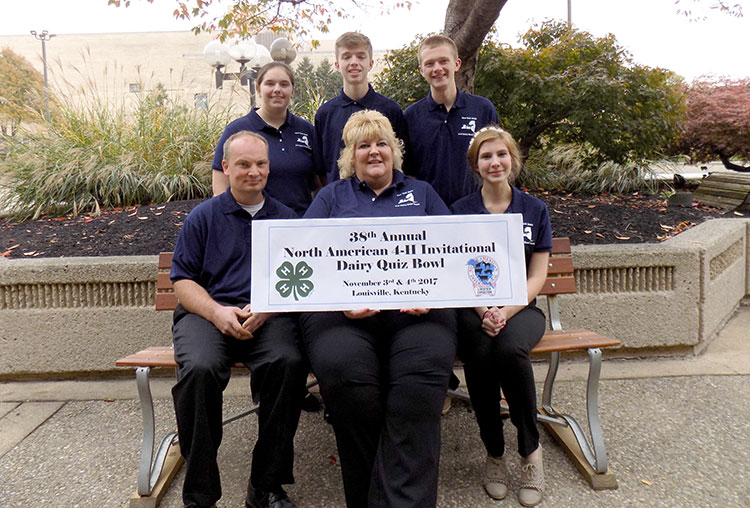 New York 4-H's winning team:
Front: Matthew Young and Deborah Grusenmeyer, coaches; Addison Richmond
Back row: Rachel Rouland, Keagan Carson, Devin Kuhn
New York 4-H is a perennial top performing team. They won the national contest for the last three years and had eight of the top nine test scores over the same time frame. This year was no different as their combined team test scores gave them the highest team score and earned them a first-round bye.

New York defeated Alabama in the semi-finals and then had to meet them again when Alabama emerged from the consolation bracket to earn a rematch in the finals. The New York 4-H team is coached by Debbie Grusenmeyer and Matt Young and consisted of Addison Richmond, Rachel Rowland, Keagan Carson, and Devin Kuhn.

Debbie Grusenmeyer, one of the New York 4-H coaches commented to me (and her team) that she was happy they won, but sometime it’s nice to see a fresh face in the winner’s circle. She was referencing Alabama’s performance. To call Alabama the Cinderella of the competition would be accurate; with their Southern drawl, extreme manners, and pleasant personalities, they gained many fans among judges and fellow competitors.

With an early start at 8:00 a.m. (Eastern time) on Saturday, November 4, teams from 15 states were ready for a full day of dairy bowl. Each match consisted of five team questions were members discuss possible answers and then the team captain delivers their collective answers to the judges. In addition to dairy knowledge, skills in logical thinking, compromise, and time-management were all used in this phase of the contest.

That phase is followed by 20 toss-up questions where the two teams go head-to-head to test their buzzer speed and their understanding of the dairy industry. Balanced teams with three teammates correctly answering a toss-up question earn the opportunity to answer a 20-point bonus question. Those bonus questions were often the difference in the matches.

The final piece of the puzzle was the written exam. Taken the night before, points earned on the test are added to the team questions, toss-ups, and bonus points to determine the team’s final score.

When they broke for lunch, four teams were still undefeated: New York, Alabama, Maryland, and Vermont. And, following the afternoon matches, those exact teams sorted their way through the other teams and the consolation bracket to place first through fourth respectively. Honorable Mention went to Georgia and Pennsylvania.

We all have our bucket list
HD Notebook
Related to:
HDN, youth, dairy bowl
In HD Notebook

Which platform is best to connect with consumers?
By Patti Hurtgen, Online Media Manager