At the Hoard Farm's recent classification, farm manager Jason Yurs and the Hoard's Dairyman editors were discussing the best bulls used over the past decade. Idle Gold E Challenge-ET 1GU418 topped the short list of two with 7GU394 Penny Lane Royal Oak Turley coming in a close second. So far, Challenge is topping Turley based on health traits and higher udder scores. Production was nearly equal between the groups.
Last year, 11 Challenge daughters had an initial final score of 82.2 at 2 years, 9 months. They averaged 83.7 on udders and 81.4 feet and legs. So far, Challenge daughters are showing great ability to breed back quickly with 8 of the 11 calving back at 3 year and 2 months.
Our 10 milking first-calf Turleys are about 200 pounds over herdmates. On average, they calved at 2-0, with all but two calving before 2-0. On appraisal day, their scores averaged 80.3, 80.8 udders, and 82.1 feet and legs.
The 10 first-calf Turley daughters were quite young by breed standards averaging 2 years, 3 months old when the Hoard Farm classified on March 29. As a comparison, first-lactation Guernseys averaged 80.45 points on their first score. However, the Hoard Farm Guernseys are getting scored at a younger age because the 138 2-year-olds at the Hoard Farm calved at 23.7 months while the breed average stands at 26.3, according to recent Dairy Records Management Systems data; the Guernsey herds in Wisconsin's AgSource Cooperative average 26.8 months at first calving. Also having used Turley as a young sire, we had one go Excellent in her third lactation on classification day, as well.
According to appraiser Brian Schnebly, there were a number of first-time young sire daughters scored during his visit. A pair of 31GU618 American Pie twins went VG-80 and VG-83 at 2 years, 1 month. Their dam is Dairyman Chiller Delovely VG-87. The granddam of those twins, Dairyman Hawk Delight, went EX-91 on the same day. Among the other young sire daughters getting scored on March 29:
• A pair of 54GU455 Laredo daughters scored VG-82 at 1-10 and VG-80 at 1-9.
• A 7GU432 Lombardi daughter scored D-78 with a VG-82 udder at 1-11.
Related

The Hoard’s Jerseys had a good year
HD Notebook 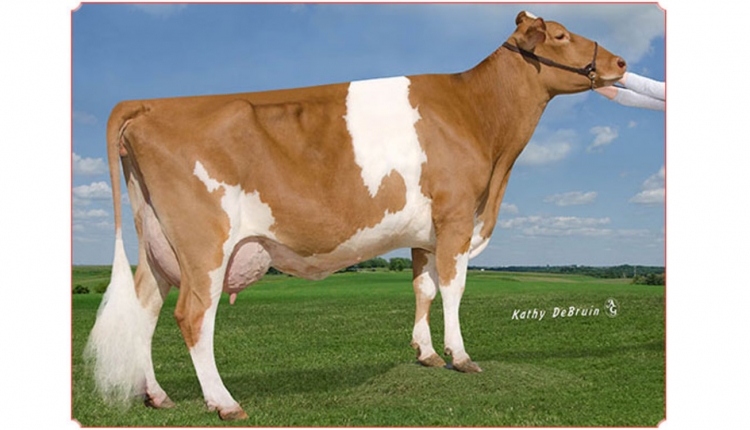