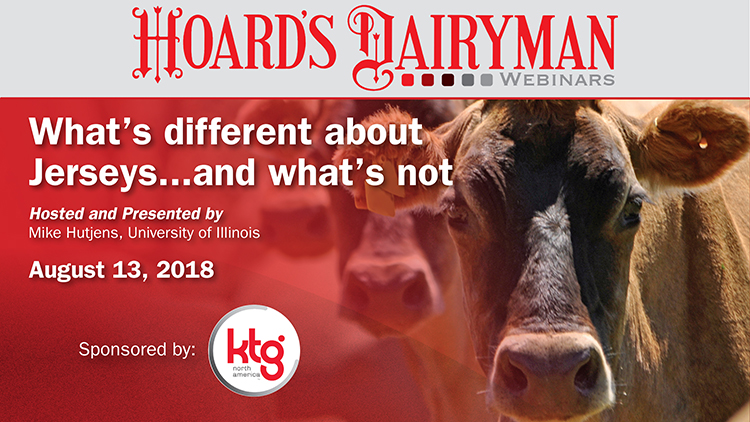 The August Hoard’s Dairyman webinar looked at the top-producing Jersey herds in the country by analyzing nutrition and production performance data. The American Jersey Cattle Association supplied the contact information for the Jersey herd owners. The University of Illinois and two graduate students worked on the project in 2017. The university’s Mike Hutjens led the study, and Jim Baltz prepared all the communications to the herds and compiled the team’s findings.

Bunk space, housing style, and stocking density were all evaluated. The feed additives used in the rations were also listed by usage. About two-thirds of herds were milked twice a day; 18.9 percent were milked three times; and the remainder were a combination of 2x/3x, a combination of 3x/4x, and robots.
In regard to feeding, 42 percent of the herds fed cows just once per day, but there were multiple feed pushups daily, as often as 12 times. Sixteen percent of the herds fed to an empty feedbunk. The upside is that only 5 percent of the herds had 5 percent weigh backs or more. The weigh backs were fed to heifers, discarded, remixed in a lower-producing group, or fed to dry cows. Hutjens recommended feeding it to steers as the best option if that is a possibility.
It was equally split between farms with a separate fresh cow group to those with a hospital/fresh cow group. Those with a special fresh cow group kept cows in that pen for an average of 30 days. Hutjens suggested that rather than using days in milk as a criteria for a pen move, instead evaluate milk production, feed intake, and overall animal health to make that determination.
These top herds were also segmented into “small” and “large” herds, with 200 cows being the divider. Their study showed no difference in milk production. They did see more aggressive feed pushing in larger herds, but saw no real distinguishable differences between the two groups.
When Jersey-only and mixed herds were evaluated, more mixed herds were milked 3x, and more weigh backs were fed in this group. Meanwhile there was more ketosis and higher somatic cell counts (SCC) in Jersey herds. This led to the conclusion that mixed herds may be more aggressive in feeding management.
Hutjens was excited about conducting the study but stated that there were some limitations. His team was unable to collect the actual dry matter of the fed as the financing to travel to all 38 herds spread across the county was far greater than the grant allowed. He also stated that the multiple TMRs were difficult to interpret, and he wished he had more data on close-up rations.
As for his final thoughts on the study he said, “There is still money being left on the table in the first 100 days of milk.” This is true, even in top-producing herds. These top herds have high nutrient-dense rations, enabling high production. But, where he saw room for advancement was with the use of inoculants and the feeding of monensin, as well as managing fresh cow groups and weigh backs.
This webinar has been archived (link to:on.hoards.com/WB_081318) and was sponsored by Custom Dairy Performance/KTG North America. You can review the data in more detail and hear Hutjens’ comments as he shared the information. Past webinars can be found here.