Suppression of the immune system at calving is inevitable, but there are ways to help cows through this time period. 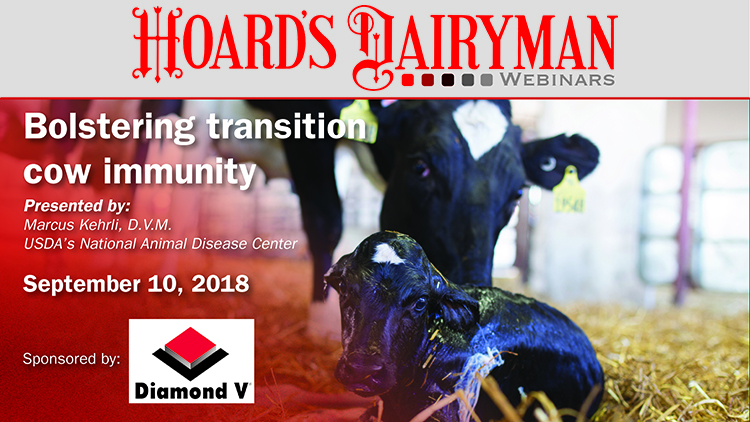 New mammary infections typically attack the dairy cow at dry off and spike again just prior to calving. Mastitis affecting the recently fresh cow drifts in an upward trend starting with 20 percent of cases in the first week and concludes with a total of sixty percent of coliform mastitis occurring in the first eight weeks after calving.

What causes this? Transition cows are immunosuppressed, and that leaves an opportunity for pathogens to take advantage. The cow’s body system is designed to protect her from infectious diseases, but it is not foolproof.

Looking at the ability of the cow to handle infections has been studied as far back as the 1880s by Russian zoologist Eloie Metchnikoff. His immunity research looked at how phagocytes attacked streptococci mastitis in the udder. Cows with stronger immunity could fight disease, recover, and eventually return to healthy milk production sooner. Those that could not recover were simply culled.

Metchnikoff also noted that the first responders, or phagocytes, were essential for udder health, as well as tackling retained placentas and metritis.

Stress in dairy cows can reduce the neutrophil phagocytosis in milk, which could lead to the susceptibility to udder infection. Therefore, stress reduces the immune response. Research that looks at immune suppression around various mammals shows a decided drop in lymphocyte antibody production during the two weeks before and after delivering a newborn. Kehrli also stated that there is strong support for a genetic component that impacts immune responses, too.

Based on neutrophil activity, the predisposition to have retained placentas exists days before calving, not just at calving. If the neutrophils are impaired (due to stress, genetics, environment, or so forth) then they cannot do a good job of surveillance, finding areas of concern, and administering to those areas, such as the udder and uterus.

Decreased lymphocyte activity delays or impairs a vaccination’s attempt to stimulate the immune system. To have the cow’s immunity at its highest, enough time is needed to build the immunity prior to calving.

There are pharmacological ways to stimulate the immunity system, which drives the production of neutrophils. There is a two-phase protocol with the administration of pegbovigrastim (PEG), a form of this immunity booster. The belief is that a cow given immune stimulants, in the form of granulocyte colony stimulatory factor (G-CSF), can be strong enough to fight disease and not succumb to mastitis and retained placenta, which in turn drives treatment costs, lost milk sales, and lowers production over the lactation. G-CSF has been shown to have profound positive effects on the immune system, in a very trajectory pattern. It also reduced mastitis cases, stimulated feed intake, and increased milk production.

Maybe the most interesting factor is that there is no withdrawal time. So, you are heading off problems before they surface (minimizing its impact) and are not dealing with residue issues. Research cows in studies cleared mastitis from their system in 30 hours as compared to non G-CSF cows that took four days to recover.

Kehrli encouraged listeners to minimize unnecessary stress in transition cows. This includes providing clean and dry housing. Additionally, he suggested balanced rations supplemented vitamin E and selenium. The addition of PEG looks to be another tool to consider.

The webinar was sponsored by Diamond V.

The webinar “The feed supply: the quality cards we’ve been dealt” will be held on Monday, October 8, at noon (Central time). Mike Hutjens and Mike Rankin, forage feeding specialists, will review this year’s forage and crop yields, pricing, quality, and availability parameters. Additionally, supplements and by-product feeds will be summarized, as profit margins continue to be challenging. Register here for all webinars. The October webinar is sponsored by Kuhn.