A big Buckeye win brought back memories and made new ones 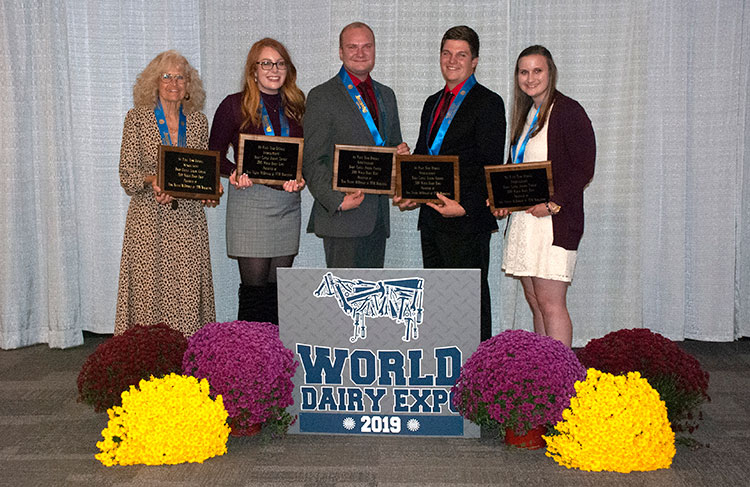 It came down to four Big 10 universities and a Big 12 school for the team title. At the end, it was the slimmest of margins. Coaches will tell students that every single point counts. And last night, it was just that close. After 12 classes and six sets of reasons, translating into a possible 2,550 points, The Ohio State University team raised the championship trophy. The margin? A single point. The Buckeyes did not win a breed until the final breed, Red and White – the same scenario as last year’s winning team from the University of Wisconsin-River Falls.

No one was more excited than The Ohio State University coach, Bonnie Ayars. Hugs for her team took priority as embraces delayed the team from reaching the awards table. Ayars serves as The Ohio State University's Dairy Program Specialist and has coached the team for the past 14 years. The Buckeyes proudly claimed their fifth championship all-time, the previous occurring in 1986.

Luck was indeed on their side. They carried several charms that held special importance with them yesterday. First, the last time Ohio State won, Pete Spike was the coach. He passed away earlier this year. His prefix was “Ten Penny” and in honor of him, each student had 10 bright, shiny pennies in their pockets throughout the contest. Additionally, they had one buckeye in their pocket. The nuts came from a tree on coach Ayars’ Land of the Living Farm. The tree was a gift from past judging team members in honor of Ayars’ son, Austin, a competitive dairy judge who was involved in a tragic farm accident a few years ago.

The Buckeyes held off a Penn State team that won the Jersey and Milking Shorthorn breeds as well as Oral Reasons. The University of Minnesota placed third. The Golden Gophers won the Holstein breed and trailed Penn State by just four points. Iowa State placed fourth, just four points behind Minnesota. Just two points behind was another Big 10 school, Michigan State. They placed fifth and won the Brown Swiss breed. Oklahoma State University placed sixth and won the Ayrshire breed. Tarleton State University from Texas was the only other team to capture a breed title, the Guernseys.

The Individuals
A name that was called many times last evening was the very last name announced – Madison Dyment from the University of Kentucky. She won Brown Swiss, Red and Whites, oral reasons, and the overall high individual title by 11 points. 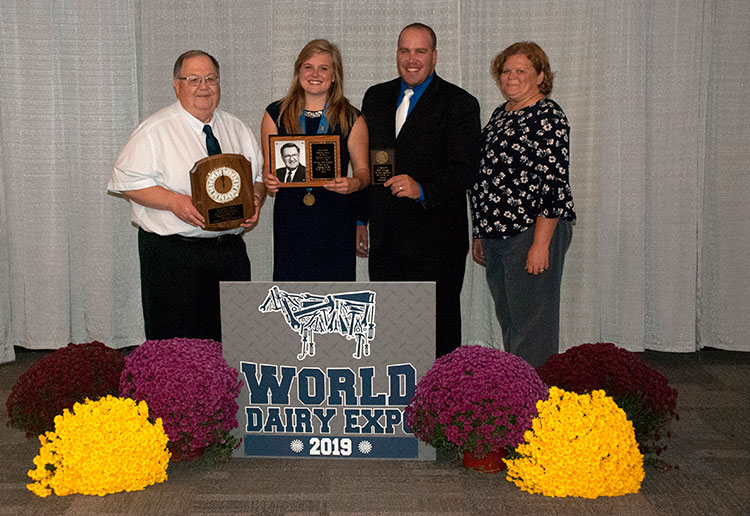 Madison’s advice to others is to “trust your judgement and do not second guess your placings. Go with your instinct and believe in what you are seeing.”

Additionally, Madison is a self-proclaimed “huge talker.” “As a child, I was talkative and very social.” She used that skill to also win the reasons portion of the contest. “I love talking cows.” Monday night proved that.

She credits her stepdad, Jamie Howard of Howard-View Holsteins, as her first coach. Jamie has continued to teach, mentor, and develop Madison’s dairy judging prowess over the years. Jamie was also an accomplished judge, attended the University of Kentucky, and placed second overall in this very contest.

A duo from the University of Minnesota claimed the next two spots, Rachel Coyne and Tanner Morrison. Ohio State’s Billy Smith placed fourth followed by Caleb McGee of Penn State, who had the top score in the Milking Shorthorn breed.

In the placings-only portion, The Ohio State University’s Lauren Almasy earned the highest score. She also was the Holstein breed winner. Avery Kotlarczyk from University of Wisconsin–Platteville won the Ayrshire breed and had seven perfect class placings — the most of any competitor. Iowa State University was the only college to net two breed winners, Carley Krull in the Jersey breed and Taylor Currie for Guernseys.

Congratulations to all contestants!