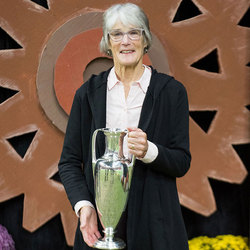 From the moment she interviewed for the then soon-to-opened University of Wisconsin School of Veterinary Medicine, this veterinarian embraced her new community and its grand cow show at World Dairy Expo. Throughout the process, McGuirk helped transform dairy cattle health care.

After being recruited to the Veterinary School by the likes of the late Dr. Lee Allenstein, the late David Dickson, the late Jim Crowley, and the late Terry Howard, all World Dairy Expo legends, this compassionate veterinarian volunteered at the 1983 show . . . and she’s been volunteering and leading change ever since — all while keeping in mind the heart of the farmer and the needs of the consumer.

McGuirk played a pivotal role in developing techniques to test milk for possible adulteration, she partnered with others on ultrasound techniques at the show, she modernized the cattle check-in process, and most recently led efforts to research overbagging.

This year’s 17th Honorary Klussendorf winner calls the 1982 interview to join the University of Wisconsin School of Veterinary Medicine “a heaven-sent interview”. Most in the dairy community believe that heaven sent those at World Dairy Expo the “Mother Teresa” of cow care. That’s because Dr. Sheila McGuirk deeply understands dairy farm men and women and their love for cows.

It’s this deep appreciation for both bovines and their caretakers that brought Dr. Sheila McGuirk to the colored shaving as the 17th Honorary Klussendorf Winner and this certainly makes Sheila a trendsetter in the dairy industry.

The award is given in memory of Arthur B. Klussendorf, considered an outstanding showman of his time and a model for all those who have followed him. This year’s selection was made by members of the Klussendorf Memorial Association, formed in 1937, at its annual meeting held earlier this week in Madison, Wis.

Serving as the meeting place of the global dairy industry, World Dairy Expo brings together the latest in dairy innovation and the best cattle in North America. Crowds of nearly 70,000 people, from 100 countries, returned to Madison, Wisconsin for the 53rd annual event, October 1-5, 2019, when the world’s largest dairy-focused trade show, dairy and forage seminars, a world-class dairy cattle show and more were on display. Visit worlddairyexpo.com or follow us on Facebook, Twitter, Instagram, Snapchat, or YouTube for more information.