With the challenging year we’ve had, producers should test forages and watch feed inventories.

“Looking at the big picture . . . excessive rainfall had a huge impact on both hay crops and corn silages this year,” said Mike Rankin.

As managing editor of Hay & Forage Grower magazine, Rankin tracks hay and forage inventories and prices year-round. “This year has been one of the lowest years for hay inventories. There simply is not a lot of dry hay in stacks and barns,” shared Rankin.

There has been a major shift in the disappearance of hay. The source of less hay can be traced to the drought in 2011 to 2012. Land that could not grow hay then simply did not return to production. Starting in 2012, there has been a decided change in hay inventories. Less hay has been grown and livestock owners are not feeding as much while cattle numbers have remained steady. 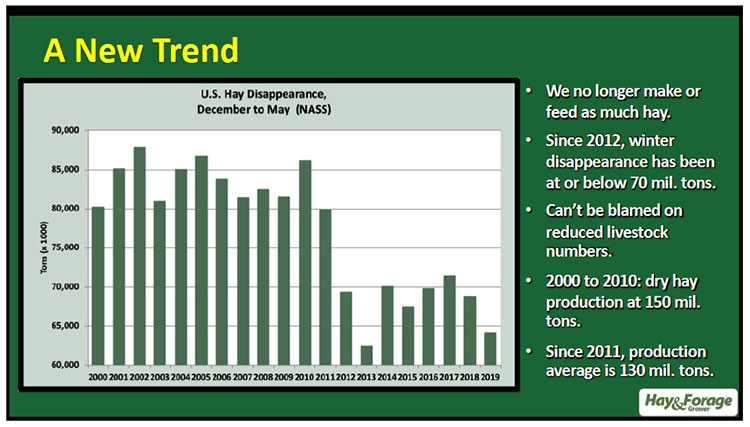 Prices have been fairly steady, but Rankin predicts that there could be a small price increase in late fall and winter due to feed shortages. However, he cautioned, “Watch for quality!” Not all hay is created equal. Know what you are buying and pay accordingly.

There was elevated alfalfa injury and winterkill in the spring. But in conversations with growers, this problem was “hit or miss” according to Rankin. Even those in the same area had varying results. Even though we had lousy weather, Rankin said that USDA still sees a 1.3 percent increase in alfalfa acres, and yields are also projected higher. Keep in mind that last year’s production was quite high, too.

With erratic weather, Rankin strongly urged growers to get their forages tested. “Quality results have been all over the board this year,” shared Rankin.

There were challenges with fall harvest this year, as well. Fields were too dry, then too wet. Soil compaction has been an issue and will be moving forward as well. With the cooler temperature, we likely will see mycotoxins.

Retired University of Illinois extension dairy specialist Hutjens echoed Rankin’s comments and urged growers to sample forages for mycotoxins. He also suggested letting corn plants mature as much as possible to maximize tonnage, because he believes there will be feed inventory shortages. Next spring will be too late to realize that you are going to be out of feed sooner than projected, he explained.

Hutjens offered the option of growing winter wheat, triticale, or fall oats for additional feed. Another possibility is to harvest prevent plant soybeans as baleage and corn stover as a forage extender.

Additionally, lower-quality feeds like corncobs, straw, or stover can receive alkali treatments – but water must be added to make it 50 percent moisture. Thorough mixing is needed for a consistent product. Again, “Water is a must!” he declared. Stover can be fed to mid-lactation cows and can replace some of the corn silage if inventories are running low.

From a management perspective, Hutjens challenged listeners to think about culling to eliminate less productive cows so feed can be allocated to higher-producing cows.

The presentation has been archived and was brought to you by Kuhn.

Join Us Next Month The transition period sets the stage for a successful lactation, and nutrition plays a major role. During the webinar, Weiss will discuss fresh cow rations, including protein, fat, amino acids, starch, and fiber recommendations. The presentation is sponsored by Zinpro.

Pick an effective inoculant for your silage
Crops and Forages
Related to:
HDN, webinars, crops
In HD Notebook