A little bit of dairy pageantry may go a long way with a consumer. 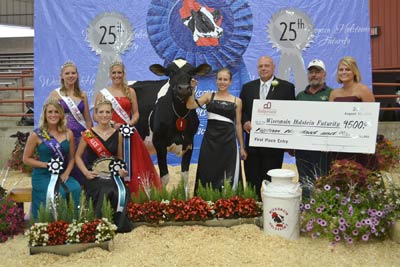 For 25 years, the Wisconsin State Fair has been the site of the Wisconsin Holstein Futurity. That, in itself, may seem relatively unremarkable. But, there's something different about this show…

First, a futurity is a show where animals shown are initially entered as calves. Futurities are common at many national, state, and county fairs and across all breeds. Breeders must try to identify which animals may grow up to be the best cows. Will that good show heifer grow up to be a good cow or that small heifer with a so-so pedigree make a potential futurity winner?

Second, this show has class. Exhibitors and dignitaries are expected to dress in formal attire. Long gowns, tuxedos, and glitter are all part of the deal. Dignitaries, including princesses and sponsors, have been escorted into the ring on everything from horse-drawn wagons to yellow Mustangs.

This might all seem a bit over the top. Yes, it provides an opportunity for a bunch of farmers to get cleaned up and evaluates the skill of predicting which of your calves will make the best 3-year-old. But, there's something more. When the bovine beauties and their leadspeople entered the ring, there was a packed coliseum full of fairgoers. While the animals were parading around the ring, the emcee offered information about the dairy industry, and the various dignitaries welcomed people to the unusual event.

For most people, showing isn't profitable, and oftentimes we wonder why we even make the trip to the fair. But, sometimes the value isn't in the color of your ribbon. It's in the skills you learn and the impression you can make on consumers. The standing-room-only crowd didn't come and go; they stayed captivated for most of the event. We overheard a family arguing over which cow they thought would win and which dress was the best. Other families followed the cows over to the milking parlor after the show to see where their milk came from. If a few consumers get that kind of interaction, maybe it is worth it.

A showring recap from a 4-year-old
HD Notebook
Related to:
HDN, agvocacy, showing
In HD Notebook