By Alexander N. Hristov
The author is an associate professor of dairy nutrition at Penn State University.
In North America, there are many native ruminants, that is, herbivore animals 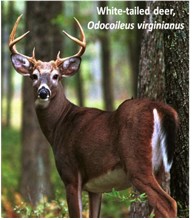 with a complex digestive system, a major compartment of which is the rumen. Some present-day examples are the bison (Bison bison), the elk (or wapiti, Cervus Canadensis), the deer (Odocoileus virginianus), or the mule (Odocoileus hemionus).

Vast herds of bison, by some estimates up to 75 million, roamed the prairies before and during the early settlement periods. As all ruminants do, these presettlement herds emitted methane, but the size of these emissions has rarely been estimated.

The common feature of all ruminants is the microbial fermentation and degradation of fibrous feeds occurring in their forestomachs, primarily the reticulorumen (the joint compartments of the rumen and the reticulum). The results of this fermentative process are products benefiting the host animal (microbial protein, used by the animal as a source of amino acids and volatile fatty acids, used as an energy source).

Rumen microbes, on the other hand, thrive in the "temperature-controlled," oxygen-free (the typical rumen microbes are anaerobes), substrate-rich environment that the host animal provides for them.

Not very efficient
Indeed, this symbiotic process is one of nature's wonders and has allowed ruminants to dominate the natural world. Ruminal fermentation, however, is not a very efficient process (at least from a biochemical point of view) and results in several by-products considered a waste, mainly carbon dioxide and methane.

Methane is a potent greenhouse gas (GHG), and domestic ruminants have been blamed by many for a large portion of the global GHG emissions, thus having a significant impact on climate change. The importance, or rather unimportance, of livestock to global GHG emissions has been discussed by us and by others (see Hoard's Dairyman, October 10, 2010 issue, page 622); here, we'll focus on wild ruminants.

Attempts in the past have estimated wild ruminants' methane emissions at around 41 to 49 grams per animal per day (which is about 0.8 to 1 kilogram of CO2 equivalent; the global warming potential of GHG is expressed as CO2 equivalents). For comparison, the average U.S. car emitted between 15 and 22 kilograms of CO2 per day in 2010 (go to http://1.usa.gov/Hoards-Car-Emissions).

Challenges in calculating methane emissions from wild ruminants arise mainly from: (1) population size is not exactly known and (2) emission per animal or per unit of feed intake is also not exactly known.

In performing the analysis presented here, we faced the same challenges and had to make several assumptions [for example, dry matter intake (DMI) for bison was based on the National Research Council's 2000 model prediction for a mature nonpregnant, nonlactating beef cow] and approximations to be able to compute wild ruminants' emissions for the United States in the past and present.

A number of wild ruminant species, such as mountain sheep, goat, and antelope, for example, were not included in the analysis, mostly due to relatively small population sizes, that is, impact on methane emissions and lack of reliable population and feed intake data. Some species, such as moose and caribou, were not included because their habitat is primarily outside of the contiguous United States (Canada and Alaska). 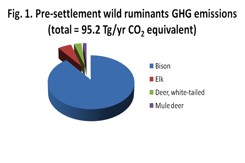 If the high bison population estimate (75 million) is taken for this comparison, wild ruminants in the presettlement period emitted as much methane as the nation's current domestic ruminants.

Present-day methane emissions from wild ruminants (excluding moose, mountain sheep, goat, antelope, and caribou) were also estimated. Body weight, DMI, and methane emission per unit of DMI were the same as for the presettlement calculations. 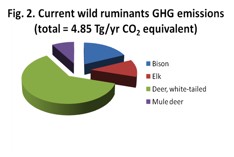 With these assumptions, it can be estimated that present-day methane emission from the major wild ruminant species in the U.S. are about 0.23 teragrams per year which is only 3.6 percent of the emissions from domestic ruminants. Due to its population size (estimated at 25 million) the white-tailed deer is the largest present-day wild ruminant contributor to GHG emissions in the contiguous United States.

Which platform is best to connect with consumers?
HD Notebook
Related to:
HDN, environment
In HD Notebook

What does sustainability mean for the next generation?
comments powered by Disqus