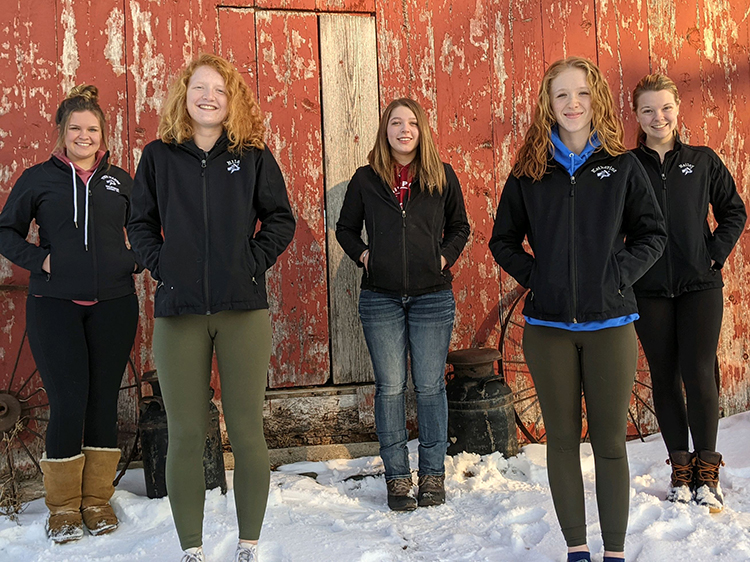 2020 NADEE winning team from Polk County, Wisconsin. L to R: Grace Haase, Ella Williamson, Courtney Glenna, Katherine Elwood, and Hailey Clausen
Many young people were devastated when their opportunity to participate in dairy-related competitions at the national level were cancelled during the COVID-19 pandemic. The organizers of the North American Dairy Quiz Bowl competition had conducted the national 4-H dairy bowl contest for 40 consecutive years and did not want to see a missed opportunity for the youth.

In-person competitions were not an option in the fall of 2020. Led by Donna Amaral-Phillips at the University of Kentucky and Jill Davidson from Diamond V, the committee took to the drawing board to develop a dairy competition that could be held during a pandemic.

The result was the North American Dairy Educational Experience (NADEE). This competition would challenge high school students to evaluate a fictious dairy farm’s management and provide suggestions for improvement based on their knowledge of animal housing, calves, nutrition, reproduction, and animal care. The overall concept is like the North American Intercollegiate Dairy Challenge, but in a virtual format.

In the fall of 2020, the contest was launched with teams consisting of three to five members, representing their state 4-H program with a limit of one team per state. On a Friday afternoon, they would receive their scenario via email. The students would then have until the end of the following weekend to review the herd details in the scenario, brainstorm an analysis for improvement, and make recommendations to the farm owner in a professionally written two-page letter detailing their evaluation of the farm, including management steps that could be taken to improve the operation. The process was spread over three months and a total of five different scenarios were presented.

What made this contest unique is that the students were totally in charge of all the research. Students could use printed content, like books and magazines, webinars, or other online resources, to gather benchmark data, but they could not consult with any individuals beyond their team members. Adult leaders could not offer suggestions or provide support material. Coaches were only allowed to forward the final two-page report to the contest organizers.

“It was a totally hands-off contest. As coaches, you are used to working with the members to teach them, but NADEE forced the students to rely on each other and their own research skills and dairy management knowledge,” shared Gwen Dado, coach of the Polk County, Wisconsin team that won the 2020 contest among a field of 15 state teams.

In 2020, some teams physically met with each other to work on the project and others communicated via email or over the phone sharing their input. One person would step up and compile the thoughts of all members into a concise letter to the owner. The team leader could be the same for the duration of the contest, or it could change with each management area focus.

This type of competition did not just favor the fastest person to hit the buzzer. It rewarded individuals who have working knowledge of the management decisions that need to be made on a farm. Instead of asking specific questions about the dairy industry in a quiz bowl format, students needed to apply their knowledge by evaluating the strengths and opportunities for improving the management practices discussed in the scenario. 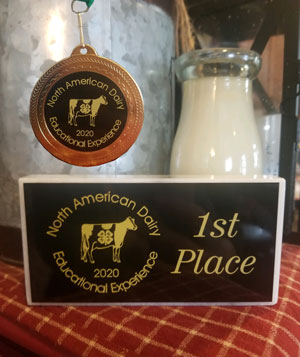 Each participant received a neck medallion and the winning team members each earned a plaque.
The summation submitted to the fictious dairy owner by the team served as outside consultant evaluating their operation. An understanding of the current management, industry standards (or better) in that discipline, and what decisions could be made to improve the operation were to be explained in detail. Attention to correct grammar, as well as a professional look to the letter, were all considered, even down to a creative name for the consulting group and team logo. However, 90% of their score was based on the content of their evaluation.

Points from the five scenarios were tallied, and the winning states were notified in the fall. The members of all teams received a medallion.

Last year, to shorten the time commitment, NADEE included just one scenario, with a focus on nutrition. The 2021 contest spanned just one week. A team from New Jersey captured the top spot. 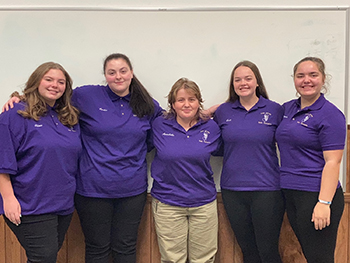 The teams that competed in the 2021 NADEE did not have to be in Louisville. They could participate from their home state and have their recommendations submitted electronically. This allowed teams with state 4-H travel restrictions and those who chose to avoid large gatherings the opportunity to still compete. The NADEE contest was held mid-October and was completed prior to the in-person quiz bowl contest at the North American International Livestock Exposition in November. Youth could participate in one or both contests, as long as they met the eligibility requirements.

Plans are underway for the 2022 NADEE contest. At this time, each state is allowed one 4-H team, which can consist of three to five members. Team members can be from the same county or from anywhere in the state. Obviously, when students live closer to each other, communication can be enhanced, but for states with fewer youth covering a large territory, this contest can fit their needs. As in 2021, there will be just one scenario to submit.

Team members are typically high school students who celebrate their 15th, 16th, 17th, 18th, or 19th birthday during the year of the contest. If they are college students, they cannot have been enrolled (or audited) in a college dairy science or animal science class prior to the fall term of the contest year. Previous NADEE winners and members of the National FFA Dairy CDE winning team from the current year are not eligible.

More details on the North American Dairy Educational Experience can be found on their website.

Which platform is best to connect with consumers?
HD Notebook
Related to:
HDN, youth, dairy bowl
In HD Notebook