It was a talking contest

It took a 48.27 to win the North American's college contest.

By Corey Geiger, Managing Editor
As a dairy-judging contestant, if someone would tell you that you would only lose 5 points out of 500 on 10 contest classes, you would have to like your chances of winning the contest. Such was the case with Iowa State's Jordan Hanson who only lost 5 points on the Guernsey fall calves (and placed the other 9 classes perfect). On top of that, he averaged 45.8 on reasons to finish with a 724 which is a 48.27 average.

However, Hanson's neighbor to the north, Jayne Esch from the University of Minnesota, was having a day that almost rivaled Hanson's day. She placed 7 of the 10 classes perfect and only lost 13 points on the remaining 3. When it came to reasons, Esch scored 8 more points to close the gap to a dead heat. With scores of 724, and average of 48.27, Esch moved past Hanson on the first tiebreaker reasons.

It was only fitting that their two teams came in first and second in the contest. The University of Minnesota, coached by Les Hansen, averaged 47 points, while Lee Kilmer's Iowa State Cyclones averaged 46.75. There were 16 teams in the college contest. 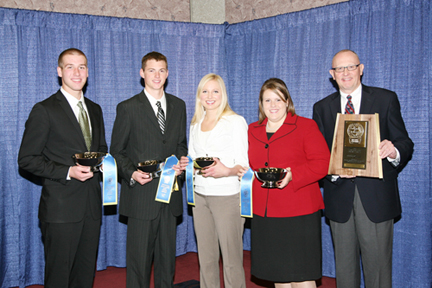 Topping the nearest competitor in the 4-H division was Ben Powers who averaged 47.77, only losing 9 points on placing. His teammate, Lizi Endres, won reasons with a 46.3 average. Amazingly, Endres was Wisconsin's drop score with her 12th place finish and 44.9 average on the day (each team can send up to 4 contestants and the top 3 individuals count towards the team score). There were 21 teams in the 4-H Contest.

The Wisconsin 4-H'ers went on to score an 8-point win over Michigan. Both Wisconsin and Michigan had 3 individuals in the top 10. The Michigan 4-H'ers won reasons. 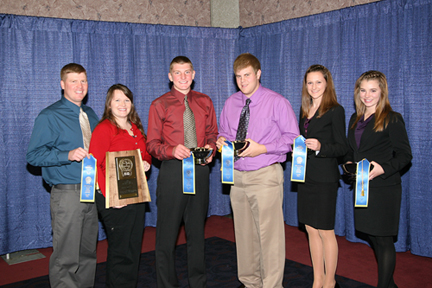 New York State University at Cobleskill won the Post Secondary Contest with an 18-point win over the University of Wisconsin Farm and Industry Short Course. Cobleskill's Colopy won high individual honors with a 46. 7 average. There were 6 teams in the contest. 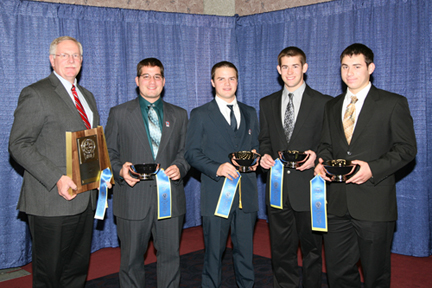