Why cheese sales potential to China is mind-boggling

Average consumption is currently 3 ounces per year. In the U.S. it's 32 pounds.

By Hoard's Dairyman staff   @hoardsdairyman
You've probably heard the phrase many times: "Anything times 1.34 billion is a very big number."

It's referring, of course, to the population of China. The point it makes is the gigantic sales potential that China represents for any product that scratches out even a tiny fraction of market share.

Intellectually, it all makes sense. But nothing drove home the scale of this concept for U.S. dairy producers with such mind-boggling clarity as a simple show-and-tell prop did at the recent United Dairymen of Idaho annual meeting in Boise. 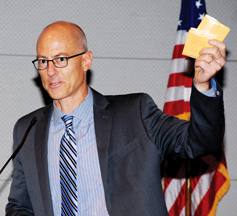 Three slices of cheese. Jeff Williams (pictured here), president and CEO of Glanbia Foods in Twin Falls, Idaho, the largest American-style cheese manufacturer in the U.S., held them up during his presentation on export marketing. When he did, everyone in the audience suddenly knew more acutely than they ever had before, how much export potential China represents for cheese.

Just three ounces, said Williams, is how much average cheese consumption per person per year is in China. Imaginations immediately began to run wild, and for good reason. Just one more slice per person per year in China is 83.75 million more total pounds of cheese. If that cheese came from the U.S., producing the milk to make it would take about 39,500 more Holsteins.

Is it any wonder that every cheese-exporting country on earth is looking so enviously at China?
Related