April milk production was up 3.2 percent over a year prior, following a March rise of 4.1 percent.

By Hoard's Dairyman staff   @hoardsdairyman
If the milk prices didn't already tell you, you should know that there's a lot of milk being produced in the U.S. today. Year-over-year, January through April have averaged 767,000 pounds more per month in 2012 over 2011. April's 3.2 percent advantage follows a March 4.1 percent gain and February's 8.1 percent rally over 2011 production in all 50 states. 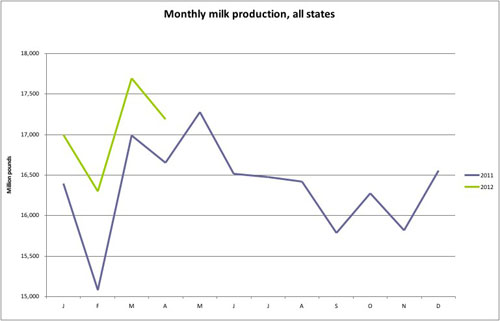 Through the first four months of the year, milk is up 4.7 percent in all states and 4.8 percent in the 23 selected states over 2011.
Related