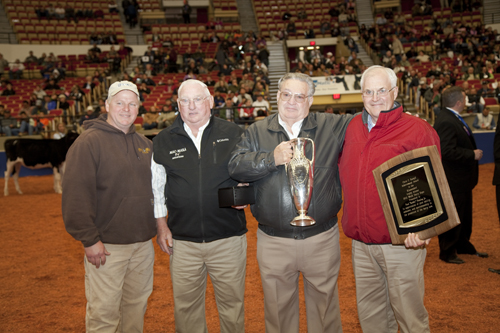 Newest Klussendorf winner, Buddy Fleming with fellow Klussendorf honorees
Paul "Buddy" Fleming, Jr., Cortland, N.Y., was named the 71st winner of the Klussendorf Trophy, the highest recognition given to a dairy cattle showman in the United States. The award is made in memory of Arthur B. Klussendorf, considered the outstanding showman of his time and a model for all those who have followed him. Fleming's selection was made by members of the Klussendorf Memorial Association, formed in 1937, at its annual meeting held earlier this week in Madison, Wis. He received the silver trophy designed by Tiffany Jewelers of New York City.

This year's Klussendorf winner is an innovator when it comes to modern fitting practices, as he was one of the first fitters to ever set toplines, a practice that was quickly replicated by others getting their cattle ready for shows. In addition, Fleming developed a ventilation system that greatly improved air quality for show cattle. As respect from his peers grew, he eventually worked for breeders in 40 states and nearly every Canadian providence.

As a child, Fleming learned side-by-side with his father who worked at the famous McDonald Farms in Cortland, N.Y., where he also learned a great deal from legendary Klussendorf winner, Henry Thomas. In 1957, he went on to show his first All American, a Guernsey that went on to be junior champion at Waterloo and Chicago. As time went on Flemming worked for the likes of Lee Yost, Woody Nunamaker, Roland Beauvais, and Dave Younger, all past Klussendorf winners.

As people recognized Fleming's talents, he also worked for the likes of Hanover Hill, Paclamar, and Dream Street Holsteins. During that time he worked with 28 All Americans and 14 Reserve All Americans including Kanza Matt Tippy, Millervale Ultimate Rosalyn, Enns Banner Olivia, all Supreme Champions at World Dairy Expo. His services were also sought by legendary photographers Harry Stroymeyer and Danny Weaver. When it came to the sales circuit, this year's Klussendorf winner worked for Backus, Hanover Hill, Shore, Brubacher, Bachman, and Whitie Thomas.

Above all, this year's Klussendorf winner has garnered the respect and admiration from his peers having worked with 13 Duncan MacKenzie winners and a remarkable 25 Klussendorf winners. Willing to lend a hand whether working with fitters, pictures, or chores, above all this man has always been a team player. 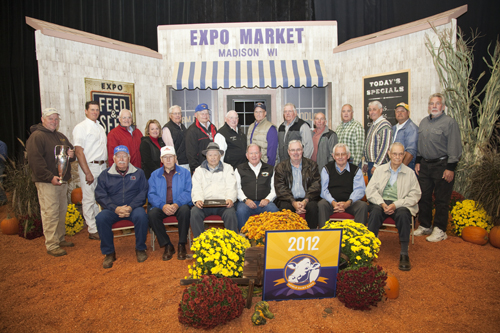 All Klussendorf winners in attendance


Return to Hoard's at Expo
Related