2012 prices look good, but don't mean much these days.

By Dennis Halladay, Western Editor
There's a cruel irony to what has been one of the most destructive financial years that dairying has ever seen: The Class III milk price average in 2012 is likely to be the third highest in history.

November's price won't be out for another month and December's won't be announced until January, but futures trading at the Chicago Mercantile Exchange for those months had been around $21 and $20, respectively, for weeks. This gives us good confidence in predicting that the average price for 2012 will be about $17.57 per hundredweight.

Relatively speaking, $17 is a huge number. It was jaw-dropping the first month it ever happened (December 1998) and as a year-long average it still looks good on paper. But that is a mirage. 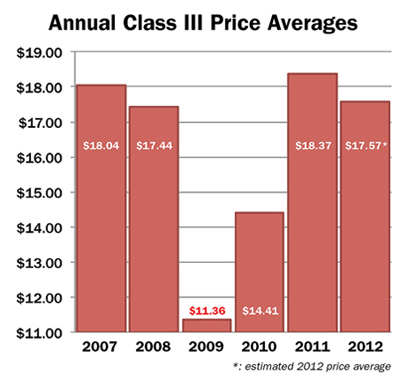 Seventeen dollar milk isn't even close to what it used to be. Neither is $18, $19 or $20 milk. That's because the new reality of production costs doesn't include $2 corn, $4 wheat, $100 hay or any of the other now-extinct prices that made it possible for decades to feed cows for just half the milk check.

Even if something so wildly bad happens to November and December prices that it pushes the 2012 average below 2008, the result will still be the same: All four of the highest annual Class III averages in history will have happened in the last six years. But instead of producing big profits and rock-like financial stability for dairies, this period has been a bust. Not since the Great Depression in the 1930s have losses been bigger, debt loads heavier, or producer hardships greater.

Understanding about the new reality of making milk is taking hold. Bigger herd size might not be better if it means taking on a lot of new debt. Leverage isn't a lottery ticket, but a loaded gun. There's no such thing as too much equity. Production per cow remains a performance yardstick, but margin measures survival. Wheeling and dealing feed was exciting, but self-sufficiency means staying in the game.

And milk price dollar amounts are meaningless numbers unless a dairy can limit cost volatility, contain downside risk, continually improve efficiency, and capitalize on market opportunities when they occur.
Related