Once alfalfa is made, its nutritional value cannot be changed, so plan ahead.

Insects, weeds and foliar disease can all reduce alfalfa stands as can cutting schedules. However, an overlooked culprit is wheel traffic (equipment) on the fields, which causes crown damage. Plan activities and routes to minimize unnecessary traffic. With mowing, baling, chopping, hauling and fertilizing, each alfalfa plant is run over at least once per year, noted Thomas.

Different equipment can impact alfalfa quality and quantity. Sicklebar and disc mowers are both used for harvest. Disc mowers are faster, lead to less equipment repairs (rocks and debris cause less damage), save labor and allow mowing closer to the ground. This has enhanced their popularity.

When cutting with disc mowers, flat disc knives (as opposed to curved knives) are better as they cause less vacuuming action. Thomas has seen little difference in alfalfa cut as low as 2 to 4 inches above ground, as long as the soil is not too dry, which can create unwanted dust.

In certain areas, he has even heard of 1 inch cutting. However, this proximity to the ground can also cause more ash (dirt) to be included in the forage. This action raises yields in the form of tonnage, but lowers overall alfalfa quality. High amounts of ash interfere with the fermentation process.

An alfalfa silage in the mid-teens for ash content should really throw a red flag at harvesting factors. That translates to about 10 percent "contaminants" in your well-intentioned high quality alfalfa silage. A cow can only eat so much feed per day and you want her eating the most valuable nutrients and not nutritive dilution like extra ash.

The process of drying can be an art form. In combination, windrows that are too wet on top and too dry on the bottom do not average a "just right" feed. Hay that is harvested too dry means shattered leaves, which in turn can become lost leaves and result in protein loss. Cutting in wide windrows aids in effective drying and therefore yields higher milk production. According to research, 11 percent milk per ton gains were seen and 20 percent more milk was realized when drying time was reduced from 25 hours to just 7 hours. Wheel traffic also plays a role here, too.

When do you cut alfalfa?
For first cutting straight alfalfa only, the PEAQ (Predictive Equations for Alfalfa Quality) method is used to measure the field's readiness for cutting. The PEAQ stick was developed at the University of Wisconsin-Madison and takes the longest stem and most mature stem measurement to establish the neutral detergent fiber (NDF) level of alfalfa in a standing crop. This assumes a 1.5 inch stubble height. "After first cutting evaluate bud stage for second and third cut," said Thomas.

Winter alfalfa survival can depend on many factors: The formula favored in calculating alfalfa's value to a dairy is milk produced per ton of alfalfa versus milk produced per acre of alfalfa. This focuses on the quality of the feed, not just the quantity. Excess ash would be noticed in this formula.

Viewer questions:
A question from an attendee addressed fertilizing alfalfa. Thomas responded that recently farmers have been applying less fertilizer to fields due to higher costs. Many crop farmers should place more focus on the potassium content of the fertilizer. "Potassium is the antifreeze for alfalfa. Low soil levels lead to higher winter kill rates," he said. Thomas advised them to look at other nutrients, too. "They are going to need sulfur in their fertilizers," he said.

Another attendee asked about seeding. Typically 10 alfalfa plants grow in a square foot. Alfalfa should be planted at a rate of 14 to 18 pounds per acre, with alfalfa/grass combinations of 12 to 14 pounds of alfalfa with 4 pounds of grass seed. However, he recommends planting based on timing rather than rate, within reason.

Application of manure on fields was another inquiry. Thomas suggested only applying manure soon after first cutting while there is little regrowth. "Use a wide distribution pattern, generally 50 to 70 feet, and not on new seedings," remarked Thomas. This will also minimize wheel traffic. 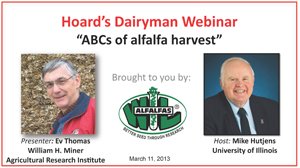 W-L Alfalfas sponsored the "ABCs of alfalfa harvest" webinar and it can be viewed by clicking the link.