A moderating drought in Oceania has caused prices to drop slightly from the recent highs. However, tighter than expected global supplies should keep dairy product prices stronger than originally expected.

By Corey Geiger, Managing Editor
Even though recent rains have eased New Zealand's drought conditions, they didn't arrive in time to shore up end-of-season milk flows. As a result of the worst drought in 30 years, March milk production was off about 16 percent compared to the same time last year for the world's leading dairy exporter. It is expected that April will post similar reductions caused by heavier than normal culling, early-season dry-offs and the simple fact the production season is coming to a close in the nation that relies heavily on seasonal calving to make the best use of the grazing cycle. All that said, the recent moisture will help pasture regrowth and allow Kiwi dairy farmers to begin reseeding projects in time for the spring flush later this year for the southern hemisphere nation that accounts for about one-third of all global dairy export sales. 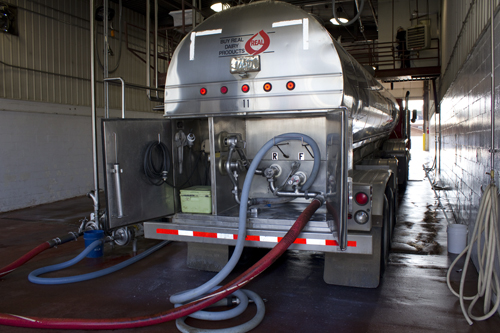 As the New Zealand drought unfolded, it fueled nine consecutive gains in trading sessions dating back to December 16 at the Global Dairy Trade. In those trades which take place nearly every two weeks, the eight-product mix for dairy product prices rose between one to four percent from mid-December to late February. As the drought became more entrenched, product prices broke higher with three consecutive trading sessions climbing over 10 percent each (March 5, March 19 and April 2). Even though prices were only up 0.6 percent on April 16 activity at the Global Dairy Trade, values remain quite robust in comparisons in trading activity dating back to 2006 and 2007. That happens to be the last time New Zealand was impacted by a drought. More insight will be gleaned from the next trading event at the Global Dairy Trade scheduled for May 1.

A barometer of world prices, the upward market run at the Global Dairy Trade since December, along with concerns of shrinking product inventories were among two factors that eventually caused U.S. dairy product prices to move upward during April. As a result: During April, Class III futures at the CME pushed over the $19 mark for the remainder of the year and have closed at an $19.04 average on Monday, April 29. At the same time, USDA inched up its All Milk price estimate for the remainder of the year. The last projection of a $19.70 midpoint is up 45 cents from January. New USDA estimates are due out May 10.

Where are product prices headed?

When looking at historical data, the current 20-1/4-cent spread between Cheddar blocks ($1.86-3/4) and barrels ($1.66-1/2) is quite large. While heavier supplies of barrels are weighing on the market, blocks are not at burdensome, reported the April 26 Dairy Market News. At some point, one price point will have to give way to the other.

From an all-product standpoint, global dairy product supplies remain somewhat tight. In addition to New Zealand, July-to-March milk production in Australia (another major dairy exporter) was off over one percent. Similar reports coming out of the European Union where poor weather and higher feed costs has stymied production so far this year. Stateside, March milk flow was off 0.3 percent nationally compared to the same time last year and is nearly flat for the year.

Given we are months away from a new calving season and ensuing flush of milk in the southern hemisphere, one would think dairy product supplies will remain somewhat pinched by historical standards. That in turn should keep milk prices a bit higher compared to earlier-in-the-year projections.
Related