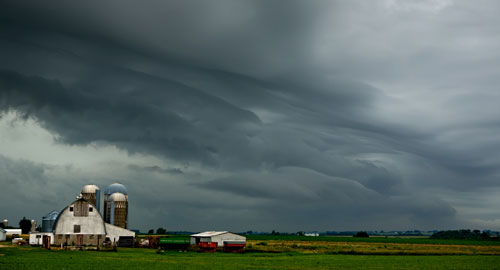 We can learn a great deal from studying weather patterns.

That was the main take away from a recent presentation by Elwynn Taylor, a professor of ag meteorology who has been studying his trade since 1982, as he shared insight with a group of ag economists.

So what was his prediction for 2014 corn yields?

"The trend says the U.S. will average 162 bushels per acre. My projection is 169," said the Iowa State professor based out of Ames, Iowa.

While a great deal of press has been devoted towards climate change, the immediate yearly weather cycles have far more to do with already existing interactions on the earth that have been occurring for centuries than any human-caused condition, stated Taylor.

Even though recorded weather data exists back to 1864 in many U.S. growing regions, studying tree ring data gives us a view into rainfall patterns dating back almost 800 years.

"We are now in year 3 of a 25-year cycle that will have volatile weather and yield patterns," he said, noting many "experts" will blame this situation on "climate change."

Part of this extreme weather will also include colder winters and warmer summers for the next 25 years, noted Taylor. "The North Atlantic Oscillation Index (NAO) is on a 40-year cycle. We are about to start a 20th episode of that cycle that will bring harsher winters to the Midwest and East Coast," added Taylor.

As for other weather patterns, it appears an El Niño might be forming in the Pacific Ocean. "When that takes place, it's wet along the U.S.-Canada border and dry in the Southwest," said Taylor. "The Great Lakes region tends to be hotter than normal while it's cool in Appalachia," he continued. "Australia can experience wetter conditions while New Zealand will be dryer," he stated. Since Australia and New Zealand are major dairy exporters, this is a situation worth tracking.

"The shift from one configuration to the other is often as important as the El Niño or La Niña itself," stated Taylor. "It is not uncommon for extreme weather to result from these strong systems as they shift positions or collide."