Metritis costs us a bundle

The milk production hit associated with metritis averaged
almost 5 pounds per day during the first 120 days of milk.

Most of us have had the unpleasant experience of dealing with a case of metritis. The foul smell and watery uterine discharge lingers in our memory long after the cow has been treated. But even more than the stink, metritis also is responsible for a number of challenges that impact how well your fresh cows do. These include a drop in milk, breeding problems, and overall greater odds for culling. Each of these issues has a cost.

Surprisingly, there is very little information available that fully evaluates all the costs of metritis. Ideally, a complete cost estimate would include milk loss, lower pregnancy rate, higher costs for resynchronization and rebreeding, greater culling losses, and any treatment costs. A 1986 study by Paul C. Bartlett, professor in the College of Veterinary Medicine at Michigan State, attempted to look at both direct and indirect costs associated with metritis. He found the total cost per cow per lactation to be $106.

Since then, our dairy industry has changed quite a bit. Knowing the need which exists in our industry for this information, we set out to estimate the total cost of metritis based on production, reproduction, and culling data previously collected from a large dairy herd.

We built a spreadsheet model to estimate the total expected costs of metritis. The data used was adapted from previous work in a 3,400-cow herd in California. We defined metritis as failure of the uterus to contract to its normal size following calving as well as the presence of a malodorous, watery vaginal or uterine discharge and a fever of 103° or higher within the first 10 days in milk (DIM).

Cows leave the herd
We started our analysis by looking at losses from cows leaving the herd. Many models will assign a cost of the cull by subtracting the salvage value from replacement cost. This is the cash cost of the cull but does not account for any revenue a cow has generated during a previous lactation. If we used this approach only, a first-calf heifer that falls and breaks her leg at calving would cost the same as a sixth-lactation cow that died at calving from milk fever.

In order to more accurately assess the cost of the cull, we calculated the expected value of that cow or heifer at that given time and subtracted any salvage value. Our estimate for costs of metritis associated with culling is $32 per case. Additionally, we estimated a cost of $40 per case for cows that die from the disease, bringing a total cost for metritis due to premature exit from the herd to $72 per case.

They produce less milk
Cows affected with metritis produce less than their healthier herdmates.
Breeding is a challenge
Metritis affects breeding, resulting in more days open and a lower pregnancy rate. In our study, 73 percent of normal cows became pregnant and survived for the entire lactation, compared to only 59 percent for the cows with metritis. Average days open was 16 days longer for the metritis group. The predicted 21-day pregnancy rate was 17.5 percent for normal cows and 13 percent for cows experiencing metritis. We predicted the monetary loss from costs of extra insemination and breeding program efforts to be approximately $109 for each cow in the breeding pool, or $98 per case of metritis, once the total was adjusted to account for the earlier culling.

The final area of consideration is the direct costs associated with treating metritis. We considered two different antibiotic choices for systemic therapy, ceftiofur (Excenel RTU) and ampicillin (Polyflex), and assumed no therapeutic advantage for one over the other. We assumed that both would be used per-label recommendation.

The cost per 100-milliliter bottle was $58 for Excenel and $29 for Polyflex, based on market prices at the time of the analysis. Excenel does not require milk withdrawal as long as no other therapy that requires a withdrawal is used. Polyflex, on the other hand, has a withdrawal of 48 hours following the last treatment.

Add it up!
As the figure shows, we estimate each case of metritis costs producers between $304 and $354 from losses in production and performance.
The magnitude of this estimate may surprise some, but the reality is that metritis is an expensive disease problem. And that's what really stinks!

If we calculate these results over a 1,000-cow herd and use an incidence rate of 20 percent, total cost would be approximately $66,000 per year. The data used in this analysis were from one large dairy with a significant incidence of metritis. While the incidence and impact of metritis may vary from farm to farm, it's clear that there are significant financial returns to be made by aggressively working to prevent, properly diagnose, and properly treat metritis. 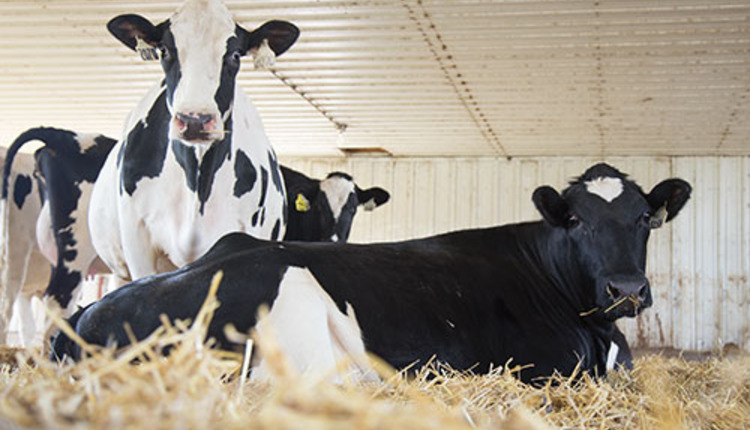