By Brittany Sweeney And   Tom Overton
The authors are a graduate student and professor at Cornell University, respectively. 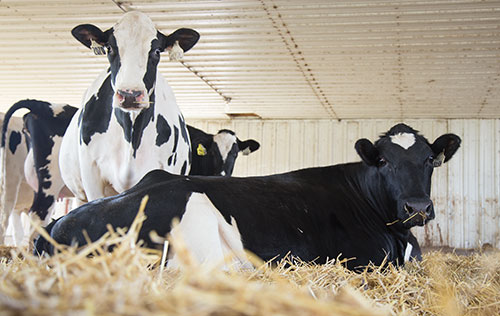 Subclinical hypocalcemia silently robs from a herd's bottom line, impairing health, production and reproduction. On-farm tools can provide a look at cows' calcium status and serve as a means to monitor the effectiveness of your prevention strategies.

Among the many challenges presented to the dairy cow around the time of calving, the calcium drain for milk production is among the greatest. In order to supply the necessary calcium to the udder for colostrum production, the cow must at least double the amount of calcium she had been supplying to the growing fetus within a matter of a day. This occurs through the additional release of calcium from bone stores and absorption from the diet.

Nearly half experience calcium drop
Many cows cannot meet this demand and, as a result, are affected by varying degrees of calcium disorders, the most notorious being milk fever. This is characterized by the "down cow" due to insufficient calcium for muscle function. Milk fever is a known risk factor for several other diseases and poor performance. Milk fever incidence has been reduced to 5 percent or less in U.S. dairy herds due to successful implementation of prevention strategies, according to the 2002 NAHMS Dairy study.

The same study, however, found that 47 percent of second or greater lactation cows, and 25 percent of first-lactation heifers, experience a drop in blood calcium below the normal range but show no clinical signs of milk fever (subclinical hypocalcemia). The question is, do subclinically hypocalcemic cows suffer similar consequences to those experienced by cows with clinical milk fever? If so, how do we measure the calcium status of fresh cows on the farm in order to take steps toward preventing the long-term damage caused by low blood calcium?

Research over the past few years has provided strong evidence that subclinically hypocalcemic cows not only have a greater risk of developing other health disorders, those cows also have reduced milk production and poorer reproductive performance. Researchers at the University of Florida showed that cows with subclinical hypocalcemia had a greater risk of metritis, poorer energy status and tended to have delayed pregnancy when compared to cows that were able to maintain blood calcium in the days immediately after calving.

Another study led by the University of Guelph that measured blood calcium in the week after calving on 55 commercial herds found that herds with a higher incidence of subclinical hypocalcemia experienced an 8.36-pound reduction in milk production at the first test day. They also had a 30 percent reduction in odds of pregnancy at first A.I. compared to herds with a lower incidence. Clearly, this disease is having lasting effects on the cow. The challenge is that affected cows do not show any outward signs and can only be identified by measuring blood calcium.

An affliction we can't see
The ability to identify those cows affected by subclinical hypocalcemia on the farm would allow for targeted intervention with calcium supplements at the time of diagnosis. It would also enable monitoring of nutritional prevention strategies implemented in the dry period, as well as provide a troubleshooting tool when cows are not meeting productive or reproductive goals.

However, ionized calcium is difficult to accurately measure and, therefore, the total blood calcium is typically measured (this includes calcium that is bound to other blood components and not available). Traditionally, subclinical hypocalcemia has been diagnosed at blood total calcium below 8.0 mg/dL. Recent research suggests that the proper cut point may be closer to 8.5 mg/dL total calcium based on occurrence of other health events and production losses later in lactation.

Determine calcium status on-farm
Research in our lab was conducted to explore different methods for assessing calcium status in cows in the days following calving. The main objectives were to assess a tool that has potential for on-farm identification of subclinical hypocalcemia, as well as to compare measurements of ionized and total calcium and determine their relative value in reflecting the calcium status of the cow.

Traditionally in research, blood total calcium measurements are made by a diagnostic laboratory. However, aside from measuring herd incidence of subclinical hypocalcemia, there is little application for this method on the farm, since turnaround time for results would not allow for treatment intervention for individual cows. The IDEXX VetTest Chemistry Analyzer was identified as a tool with on-farm potential for measuring blood calcium because of the ease of use and lower cost of measuring blood calcium when compared to the diagnostic lab.

To investigate the relative value of total versus ionized calcium in reflecting the calcium status of the cow, the ionized fraction of calcium was measured on the same samples and compared to total calcium as a predictor of the killing ability of neutrophils. Neutrophils are immune cells known as a "first responder" to infectious challenges.

Calcium is essential for the activation of immune cells, and we would expect ionized calcium to explain more of the variation in the neutrophil oxidative burst because it is the metabolically active form of calcium in the blood. While both calcium measurements were significant in explaining the neutrophil oxidative burst, ionized calcium did not provide a strong advantage over total calcium, indicating that total calcium is sufficient when assessing the calcium status in fresh cows, as it relates to this one measure of a functional use of calcium in the cow.

Subclinical hypocalcemia is a highly prevalent disease with costly consequences for health, milk production and reproduction. Tools that measure blood total calcium can provide answers on the farm about the calcium status of fresh cows and a means for regular monitoring of herd incidence of subclinical hypocalcemia. This can allow for objective examination of the efficacy of prevention strategies and more targeted use of treatments to maximize the success of cows throughout their lactation.